This 10th volume of recordings of Jascha Spivakovsky, the Ukrainian-born pianist who died without having released any commercial solo discs, continues with two 1950s appearances with orchestra and a fascinating bonus of the earliest known recordings of the pianist.

Spivakovsky enjoyed a warm relationship with the French conductor Pierre Monteux, whose autographed photo still resides on the pianist’s Steinway in the family home, so it is unfortunate that only one recording with this duo has been found. This April 6, 1952 Standard Hour broadcast with the San Francisco Symphony Orchestra features the final two movements of Mozart’s Piano Concerto No.23 in A Major K.488, all that were programmed for this appearance (soloists frequently played only a movement or two on these programs). An earlier concert recording of the entire work was released in Volume 5 of this Bach to Bloch series, but the excellent sound quality of this particular reading - as well as the exquisite beauty of Spivakovsky’s interpretation - warrants its release. The pianist’s crystalline tone and supple phrasing are a marvel to behold, his playing as lyrically sumptuous in the second movement as it is vibrant in the third. While Monteux introduces some unexpected tempo shifts in orchestral tuttis in the final movement, these do not detract from the wonderful rapport between the soloist and orchestra, the textures and balance being particularly accomplished.

Beethoven was among Spivakovsky’s greatest loves and his readings of the concertos won him praise around the globe. The January 28, 1956 BBC broadcast of the Piano Concerto No.4 in G Major is a different but equally compelling performance to the 1961 Melbourne account issued in Volume 7. While the previously released traversal finds the pianist, who had suffered a major medical emergency, giving a rather robust reading, the interpretation presented here is more consistently spiritual and reverential in approach. Despite less-than-ideal microphone placement, we can easily admire the pianist’s golden sonority, burnished phrasing, impeccable timing, and refined nuancing in this truly inspired performance - as ideal an account of this work as one could hope to hear.

The closing of this volume will come as a surprise to those familiar with the fact that Spivakovsky never released a solo recording. The pianist went to the Parlophone studios in Berlin several times to accompany his violinist brother Tossy on some of his records, and on November 19, 1927 he made one test disc as a soloist. However, Jascha was unsatisfied with the limited tonal range of the record, and as a result his only solo studio effort was never issued. We present here for the first time the artist’s performances of Chopin’s Nocturne in F-Sharp Major Op.15 No.2 and Liszt’s Liebestraum No.3 from that studio session. In both works, Spivakovsky’s tonal colours, peaked phrasing, and incredibly broad dynamic range are appreciable despite the frequency range limitations of this 90-plus-year-old recording. Especially noteworthy is the pianist’s spacious timing at transition points (his rubato is beautifully coordinated with adjustments in dynamic levels) and his burnished lines soar above his measured accompaniment. Fans of historical recordings will be able to appreciate more here than the pianist himself could and will surely be grateful that this incredibly rare test disc (only one copy is known to exist) is now available.

The two radio recordings, both dating from the 1950s, were generally in excellent condition, though the 1952 NBC recording improves on the 1956 BBC recording in a number of ways, not least the microphone position with relation to the piano, which in the later recording is somewhat distant. Alas this is something that cannot be changed 63 years after the event. Given the quality of the performance, this listener can only wish that NBC had commissioned a broadcast of the full Mozart concerto - the performance is exquisite, and the sound recording exemplary.

The two unpublished 78rpm sides hold astonishing levels of detail. These were made just two years after the first commercial "electrical" - i.e. made using microphones - recordings, and despite the early nature of them their clarity and tonality is exceptionally good. Background noise levels were slightly higher on the Chopin than the Liszt but neither is excessive - something of a relief when only a single copy of a disc exists. In both cases I've opted for relatively minimal intervention and noise reduction - the excellent sound quality you hear is a great demonstration as to how good these two recordings were. 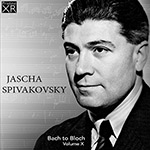