Mozart is not particularly well-remembered for his string quartets - a number of his early compostions in this genre are at best undistinguished. However, following the careful study of quartets by Haydn, Mozart went on to write a number of excellent works, six of which are known as the Haydn Quartets - this is the fifth, written in Vienna in January, 1785.

It was after hearing the latter three of the six that Haydn turned to Mozart's father, Leopold, and famously remarked: "Before God, and as an honest man I tell you that your son is the greatest composer known to me either in person or by name. He has taste and, what it more, the most profound knowledge of composition." The music you'll hear by clicking on the play button demonstrates the drum-like rhythm used in the third movement from which the quartet gets its name.

The Roth String Quartet (Roth, Antal, Molnar and Scholz) recorded 7 quartets for Columbia in the mid-1930's, of which this was the only work by Mozart, issued in the Columbia Masterworks series. We can find no evidence of it ever having been reissued. 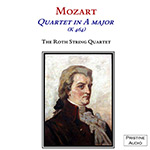