Ania Dorfmann in solo and concerto recordings from the 1950s

Including her only stereo recording, in fine new transfers by Mark Obert-Thorn

It is unfortunate that Ania Dorfmann is remembered today almost exclusively for being the soloist in Arturo Toscanini’s only studio recording of a Beethoven piano concerto.  Her career extended far beyond the Maestro’s orbit, as the present reissue demonstrates.

Dorfmann was born in Odessa in 1899 to a merchant’s family.  Recognized early on as a prodigy, she played her first recital at the age of eleven.  Around this time, she also gave a joint concert with the even-younger Jascha Heifetz.  Plans were made for her to go to Paris to study with Isidor Phillip at the Conservatoire, but the death of her father postponed the trip for several years.  She had been in Paris for less than a year when revolution broke out in Russia.  After a visit home, she was only able to return to France with some difficulty.

She made her début at Liège in 1920, and concertized throughout Europe over the next fifteen years, appearing with such conductors as Mengelberg, Beecham and Wood.  During this period, she made a number of recordings for English Columbia, including the Mendelssohn First Piano Concerto with Walter Goehr.

In 1936, she made her American debut at Town Hall in New York, where critics praised the “rapidity and clarity” of her technique.  Horowitz introduced her to his father-in-law, Toscanini, and she soon became an intimate of the family.  (A letter written by Toscanini in Milan in April, 1937 mentions “Ania, that friend of Volodya’s (she’s a Russian pianist).  She’s here all the time, morning and evening.”)  She was later to collaborate with the conductor on four occasions, all in works of Beethoven:  the Choral Fantasy (1939); the Triple Concerto (1942); a broadcast of the First Piano Concerto with the Reineke cadenza (1944) followed by a studio recording of the work with one of Beethoven’s own cadenzas (1945).  All of these have been available on CD.

Dorfmann settled in America and joined the faculty at the Juilliard School.  She continued to concertize and made a number of recordings for RCA Victor during the 1940s and ‘50s, including the Beethoven “Moonlight” and “Pathétique” Sonatas, the complete Mendelssohn Songs Without Words, the complete Chopin Waltzes, the Albums for the Young of both Schumann and Tchaikovsky, and a recital disc featuring works by Liszt, Ravel and Menotti among others.  While her English Columbia 78s have been well covered in CDs from Pearl and Dutton, her RCA recordings have remained largely unreissued.

The two concertos on the present reissue feature The Philadelphia Orchestra in its summer guise, and were in fact the last recordings made under the “Robin Hood Dell” name.  Like her Beethoven and Chopin LPs, they were originally released on RCA’s budget Bluebird label, but were promoted to full-price Red Seal shortly thereafter (LM-2102).  The Carnaval comes from her last (and only stereo) recording, an all-Schumann program which also included his Fantasiestücke.

Dorfmann continued to teach until a year before her death in 1984, having retired from the concert stage several years earlier.  Now, with the reissue of her later recordings such as the ones presented here, a fuller appreciation of her considerable artistry becomes possible. 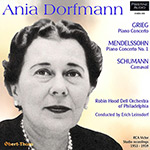 Odessa-born Ania Dorfmann (1899–1984) was one of many artists who came to the United States prior to World War II. She had the additional cachet (which ultimately may have limited her career as much as it helped) of having been close to the Toscanini family—an intimate friend, or nearly. She appeared in the Maestro’s 1939 Beethoven cycle as pianist in the Chorale Fantasy and later as soloist in the First Piano Concerto. She made a studio recording of that work in 1945. She also appeared in a gala wartime concert in which she was the keyboard artist in Toscanini’s only U.S. performance of Beethoven’s Triple Concerto. These various performances of Beethoven are quite readily available. They are discussed in the excellent notes accompanying this disc.

In pre-war Great Britain, she made the recording which set her on the road to a significant career: Mendelssohn’s Piano Concerto No. 1, which she performed for 78-rpm discs, joined by Walter Goehr and Beecham’s London Philharmonic of the day. This sprightly performance sold well, was positively reviewed, and greatly expanded her reputation. She was, of course, already well in her 30s and a mature artist. RCA contracted her in the early LP era. Her biggest venture was a three-disc set of Mendelssohn’s Songs Without Words (monaural issue), which I recall as being extremely lovely; well played, well phrased, and well recorded. To my best knowledge those have never been reissued … another project for Pristine Classics, perhaps, if this disc sells!

RCA recorded the Philadelphia Orchestra, under exclusive contract to Columbia Masterworks, under the nom du disque Robin Hood Dell Orchestra of Philadelphia. Almost every summer, for a few years, there would be a recording or two, including superb Kapell recordings of Rachmaninoff, the Second Concerto led by Steinberg, and later the Paganini Rhapsody with Reiner on the podium. Those remain my recordings of choice for the two works. In July 1953, RCA returned to the Academy of Music to make its last Robin Hood Dell recordings, the two concertos under discussion here: the Mendelssohn on July 7 and the Grieg the next day. The performances were issued on its budget Bluebird label, LBC 1043. I bought my copy the day it appeared in my local record store, in late 1954 or early 1955.

If the Mendelssohn First did not quite equal the pre-war set for brio, it came very close and surely featured a smoother orchestral contribution. Leinsdorf is just a trifle heavy of hand at a few points in the first movement, but Dorfmann plays the Andante touchingly, with depth of feeling and a lovely tone. The finale really takes off. At the time there was little post-war competition; I think Decca had recorded the work with Lympany, but Decca releases were not easy to locate in this country until a bit later in the 1950s, so the Dorfmann LP had the field almost to itself.

Such was not the case with the Grieg. Many recordings were available, and RCA struggled for some years to find the one it wished to market. Rubinstein’s 78-rpm version (a 1942 Academy of Music collaboration with Ormandy—the first concerto recording my mother ever purchased) was one of the last RCA-Philadelphia recordings. It was followed at the dawn of the LP era by a remake led by Doráti. No one liked the sound, and I don’t much care for the performance. So the field was open for Dorfmann and Leinsdorf. To my ear the result of their efforts that July day is one of the loveliest recordings ever made of the charming work. The pianist plays superbly, with great profile. She, Leinsdorf, and the orchestra sound as if they are giving a real performance, and because the orchestration is richer than that of the Mendelssohn, we can appreciate the sonic picture even more, particularly in the expanded ambience and bloom Mark Obert-Thorn provides in this reissue. I’ve loved this recorded performance for 60 years and it is a pleasure to welcome it back because it did not long remain in the catalog. Rubinstein made an early stereo recording with Wallenstein which suffered from various shortcomings (sonic among them), but in March 1961 those artists made another RCA taping in the Manhattan Center ballroom which stood as their final statement. A great recording, it is still being marketed.

Dorfmann, sadly, had only one opportunity before the stereo microphones. In 1959, RCA recorded her in Schumann: Carnaval and Fantasiestücke. Again, she was replacing an unsatisfactory monaural recording of Carnaval which Rubinstein had made in the mid-1950s. Coupled with a stunning performance of Franck’s Prelude, Chorale, and Fugue, that Schumann never met with critical favor, nor did the pianist himself like it. Surely there was more than room for Dorfmann’s disc, yet I don’t think it was aggressively marketed and I, an inveterate collector at the time, never saw it. A new Rubinstein LP, with the same coupling as the Dorfmann, was issued in 1963, and I suspect the earlier release was quietly dropped from active circulation.

I find Dorfmann’s Schumann a delight. She does not have the variety of touch heard in the classic Rachmaninoff recording (which lacks recorded sound such as this), and her scale is a bit smaller than that of Rubinstein (whose very fine later recording still fails to equal what I heard him achieve in Constitution Hall, Washington, DC, in 1958). What Dorfmann has is excellent fluency, solid technique, and a world of charm which she brings to Schumann’s shifting moods—and really beautiful sonics. It is a performance to return to and in this remarkable sonic framework, it wears very well.

Andrew Rose has applied his pre-echo removal techniques to the stereo sound and the result is a beautiful piano tone throughout. I still own the 1963 Rubinstein LP replacement and sonically there is no comparison with the sound of Dorfmann as presented here. Similarly, Obert-Thorn’s remastering of the always decent source material from the concerto tapes yields sound of brightness and clarity. The sound is better balanced and has as much presence as a couple of recently recorded discs which I have recently reviewed. Once again, we are in Pristine Classics’ debt and the result is a CD to which I will be listening for the rest of my days.