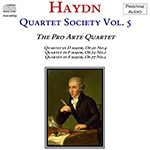 The music never disappoints; the variety is beyond compare. How did one man conceive of such a body of work?

It seems to me that the reprocessing and sonic enhancement of the 78's comprising this series grows finer with each volume: the sound is richer and aerier and there is greater presence and sense of staging. The music never disappoints; the variety is beyond compare. How did one man conceive of such a body of work?

Op. 20 #4 from the great "Sun" quartet series begins with a mellow theme which dominates the entire movement. A nearly textbook example of the "false recapitulation" ensues. A slow movement featuring variations is followed by a short minuet. The quartet is capped off by a mercurial finale in sonata form containing numerous themes with many starts and stops in Haydn's typical witty mode.

Op. 74 #2 begins with a fanfare theme which is subject to considerable contrapuntal development, but which is allowed to recapitulate nearly normally (or as normal as Haydn ever gets). A slow movement with beautiful but rather conventional variations is followed by a vigorous minuet and a beautifully contrasted trio. The finale is a hell-for-leather prestissimo which never slackens but does permit a short development to zip by.

Op. 77 #2, Haydn's last completed quartet, begins with a full, rich first movement whose themes are subject to a long development and a regular recapitulation. An agitated yet playful minuet encloses a suave trio. A noble andante is subject to variations which never really stray far from the theme. How Haydn does this while still maintaining interest is a secret known only to him. Haydn's last quartet finale is one of the most thoroughly developed movements in classical quartet literature, a fitting end to one of music's most inexhaustible treasures.