When restoring these recordings from original 78rpm discs we always strive to use the best-quality source material. In the case of this volume, we had two near-mint sets of discs to work from. Thus should a problem arise with one set it would be possible to turn to the other set for a second chance to find the optimum transfer. In the case of the very first side of this set, I noted poor surface quality, with a pronounced swish, and a tendency to slight screeching in the strings. Naturally I immediately turned to our second copy and transcribed this, only to find exactly the same problems - even down to the swish reproducing identically on both discs.

In both cases the difficulties eased off around halfway through the side, and I can only put this down to problems in the mastering or pressing stage of record manufacture. As such the sound quality, whilst hugely improved, is of very slightly lesser quality for the first two to three minutes of this recording than I had hoped to achieve. I'm happy however to state that the 55 minutes of music which follow are delightful! 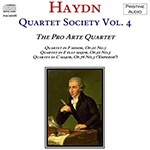 From the magical cornucopia of Haydn quartets come three more quartets played incomparably by the great Belgian pre-WWII ensemble. The quartet recordings seem not to be a performance, but as the French say, "la chose en soi": the thing in itself. The Pristine Audio remastering, perhaps "recreation" is the true word, has succeeded into injecting air and presence into what must have been, even for 1934, a very dull and flattened recording, in effect taking matzohs and making a souffle.

Opus 20, #5 begins with an urgent, minorish theme and, after a conventional development, goes into an intense, complex recapitulation. A minuet follows with a major-key, lyrical trio. The andante is more decorative than deep. A splendid fugue finishes off the work in the manner of the Op. 20 "Sun" quartets.

Opus 50, #3 presents a very perky, energetic exposition leading to a contrapuntal development and features a false recapitulation. The real recapitulation is ingenious, filled with Haydnesque tricks. A walking, monothematic andante leads to a vigorous, thrustful minuet. The finale is typical of Haydn in that it is a spinning top, filled with clever touches and never faltering.

Opus 76, #3, the "Emperor" quartet, is so-named because the second movement presents a set of variations on the Austrian national anthem. The first movement is one of Haydn's greatest: mellow, complex, imaginative. The Pro Arte play the repeated exposition; the development is highly imaginative and ends in one of Haydn's great structural strokes: a version of the opening them that sounds like one of his false recapitulations, but is really not. After a pause, the true recapitulation follows and confounds one by being even more brilliant than what has gone before. The famous second movement reminds me of what Tschaikowsky (I believe) said about variations: "never use a beautiful theme as the basis for a set of variations. The variations only spoil the theme". So it is, I believe, with this movement. The variations are rather decorative and rarely stray far from the theme. Haydn's genius prevents vapidity, but only just. A hearty minuet leads to a serious and agitated finale which begins with three sharp chords. These chords reappear in many guises throughout the finale.