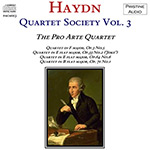 There is something about the Pro Arte that sets forces in motion in me...

There is something about the Pro Arte performances and their life-giving enhancements by Pristine Audio that has provided me a much greater insight at the age of 73 into the unfathomable depths of the world of Haydn's quartets. They are different in kind from Mozart and Beethoven and Schubert and I despair from ever summing them up. The best I can do is to say is that they are "genius at cosmic play". They are, of course, well served by the modern quartets--the Mosaiques and the Juilliard, in particular--but there is something about the Pro Arte that sets forces in motion in me.

Op. 3 #5 is not by Haydn but by Roman Hoffstetter, who, if he is not Haydn, should be. A perky, irrepressible allegro leads to the famous serenade, which the Pro Arte plays very straight. A forceful minuet then is followed by a nippy little theme which breaks out of its cage and does some big things, a typical Haydn trademark. Fess up, Roman, where did you get the manuscript?

Op. 33 #2 is a very inventive work that opens with a large, swinging theme. Strong contrapuntal and harmonic development lands us at one of Haydn's favorite tricks: the False Recapitulation! A little more devopment and we get the real recapitulation which is filled with more development. A minuet with surprises and a waltz-like trio is followed by a serious hymnlike slow movement with fortissimo interjections. Finally, a real triumph, a jolly presto made from only one theme--one of Haydn monothematic finale marvels. What a work!

Op. 64 #6 features a mellow theme subjected to a strong contrapuntal development and then even worked over some more in the recapitulation. The second movement is a 3-part solemn adagio punctuated by a string caprice. An unsettled minuet is paired with a trio with very high harmonics. The finale has a skittish, nondescript theme which is always a signal in Haydn that all Hell will break loose and boy does it ever.

Finally, Op. 71 #1 begins with five chords announcing a looselimbed theme which goes through more adventures than Rambo. A very beautiful and harmonically advanced slow movement follows. A mellow, traditional minuet leads to a coruscating presto finale in sonata form. The development is so fast and serious that while I was looking for the recapulation, the movement and the quartet ended soft and quicksilver.