Mozart's string quartets were surprisingly neglected during the 78rpm era, and it was astonishing to find that this masterpiece from his series of six quartets dedicated to Haydn received almost no attention whatsoever. We managed to trace a 1912 recording of the third movement, and a later US recording (by the Busch Quartet) of the full work, but this rare use appears to be the first attempt to make available commercially Mozart's 16th String Quartet.

The plot thickens when we try to find out more about the quartet and this recording, probably due to its heritage. An authoritative guide to British 78rpm releases states that Decca released no material in collaboration with the German Polydor label between 1933 and 1941, yet these discs are all stamped with the German mechanical copyright imprint, dated 1935, and it was from this alone that we were originally able to date the recording.

Of the Prisca Quartet, we know of Hans Munch-Holland from his involvement with Max Strub and the Strub Quartet - in particular his contribution to their recording of the Bruckner Quintet, remastered and reissued by Pristine Audio as PACM006. The Prisca Quartet also recorded Mozart's 20th Quartet, K.499, as well as works by Haydn and Schubert, and the Bruckner Quintet with S. Meineke. We've also found mention of a recording of Verdi's Quartet in E minor.

Beyond that the trail runs dry thus far. What I can say is that this is one of Mozart's finest quartets, the playing and recording are both superb here, and those with a sharp ear will note the homage Mozart plays in the third movement to Haydn, basing his Minuet very closely indeed to the Scherzo in Haydn's Quartet in E flat major, Op.33 No.2 ("Joke"), as released on Pristine Audio's PACM013, The Haydn Quartet Society, Volume Three. 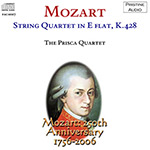