We follow the first ever release a few weeks ago of Serge Koussevitzky conducting Beethoven's 4th Symphony (coupled with a previously unissued Seventh, Pristine PASC515) with another coup - the first ever issue of Koussevitzky conducting Beethoven's 1st Symphony, this time coupled with an unissued live performance of the Sixth.

The First Symphony hails from a French radio re-broadcast of a 1950 live performance with the Orchestre National de l'O.R.T.F.. Whilst this recording is pretty good for its era, with a frequency range exceeding most 78rpm releases, if not quite reaching the levels expected of the imminent hi-fi era, it did suffer from cross-talk interference from another station, allowing one to hear from time to time another piece of music bleeding through into the Koussevitzky performance. By taking a digital scalpel to the Beethoven I have endeavoured to excise this as much as is currently possible, though there are moments where the frequencies of the notes in both pieces coincide to the extent that the offending music cannot be entirely removed. That said, it is now a very occasional and very minor irritant, and one you may not notice at all.

Aside from his 1928 Victor recording, you'll struggle to find many other examples of Koussevitzky conducting the Pastoral Symphony, yet as the reviewer from the Boston Globe implies, it was a regular and popular part of his repertoire in Boston. This October 1943 recording (from later on the day that the review quoted was published), save a few blasts at peak moments, has been very well preserved from a live radio broadcast, and offers nearly the same fidelity as the later French recording. Both are essential additions to the catalogue.

Cover artwork based on a photograph of Koussevitzky 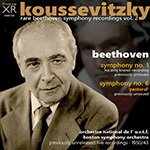 Download Artwork
Download Artwork
Beethoven’s “Pastoral" has come to be one of the loveliest Koussevitzky performances. He and the Boston Symphony have done it with more finesse, however, than was true yesterday. But even those little roughnesses did not violate the mood of the "Pastoral” nor dim the lustre of Koussevitzky’s conception.