"This is quite the finest Beethoven Seventh I have heard from Klemperer ... One surrenders to it and is swept to an overwhelming conclusion" - MusicWeb International

This live radio recording, sourced here from a later, high-quality French FM rebroadcast, offers us nearly eighty minutes of Otto Klemperer at the height of his musical powers, some three years after he began his run of extraordinary recordings with the Philharmonia Orchestra for EMI, thanks to the efforts of legendary producer Walter Legge. 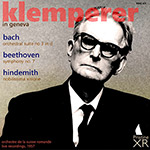 In every movement, the OSR responds magnificently, playing with great concentration and faithfully producing the conductor’s trademark granitic Beethoven textures

After his enforced exile from Nazi Germany, Otto Klemperer endured twenty or more years of wandering before finally making his home in Switzerland. This CD presents a ‘live’ concert with the Orchestre de la Suisse Romande (OSR) and is a product of his residency in that country. The performances are impressive for their ‘heroic scale’, as Peter Heyworth characterised Klemperer’s conducting in general. His attention to detail is accommodated within an unfailing sense of structure. The source of this CD issue is a high-quality French FM re-broadcast of a live recording.

Paul Hindemith was one of two composers – the other was Igor Stravinsky – whose music helped to establish Klemperer’s reputation as a modernist during his tenure at the Kroll Opera in Berlin between 1927 and 1931. Nobilissima Visione was a ‘choreographic legend’ in one act and five scenes for which Hindemith composed the music. Massine devised the choreography and danced it. The Suite which was taken from the music is in three movements. It is blazing and powerful – ‘visionary’ indeed – and the OSR under Klemperer responds with whole-hearted commitment to its demands, as it does to all the music played here.

Each of the works performed in this concert had been recorded in the studio by Klemperer with the Philharmonia Orchestra two or three years previously. A performance of Nobilissima Visione was probably his first recording for EMI. It was issued back-to-back with the Brahms/Haydn Variations on a ten-inch medium play disc and was most recently reissued in a CD boxed set of Klemperer conducting twentieth century music – review. In comparing this performance of the Hindemith with the OSR’s, due allowance must be made for the compromises of the ‘live’ recording process. Perhaps understandably, the Walter Legge/Philharmonia regime at its zenith surpasses the ‘live’ production from Geneva’s Victoria Hall – but not by as much as you might expect.

Klemperer’s direction varied only a little: the OSR performance is just under a minute faster. What is noticeable is the superior balance achieved by Klemperer and Legge in the studio. In the EMI recording, the drum which accompanies the solo flute (probably Gareth Morris) in the second movement’s March has a very tangible, but not exaggerated, presence – a dramatic effect which the composer surely wanted. In the OSR production the drum is there but is less present. In the fierce contrapuntal uproar which prevails at the conclusion of the third movement’s Passacaglia, the Philharmonia’s woodwinds are clearly discernible shrieking impressively amid the din, the OSR’s less so. EMI’s clear yet full-bodied, wide-ranging recording is, in short, a stunning example of high-fidelity mono sound, better than many a modern effort.

For the OSR’s performance of Bach’s Orchestral Suite No. 3, Klemperer uses an orchestra of large if indeterminate size and there are few concessions to ‘scholarship’. Yet what is clear from this performance and the Philharmonia recording he made in 1954 is that Klemperer was a Bach interpreter of formidable power, intellect and concentration. The studio performance has somewhat more clarity and may have used a smaller body of players and thus sounds a touch more ‘authentic’. The two readings are very similar in outline and their total timings differ by just one second. Listeners without ‘HIP’ prejudices, or able to suspend them for half an hour, will be impressed by these performances.

The best is last – Beethoven’s Seventh Symphony. In assessing this recording, my benchmark was Klemperer’s superbly recorded 1955 EMI mono performance, not the one recorded in rather indifferent experimental stereo at the same time. Unfortunately, it is the latter version which has been included in the conductor’s EMI/Warner boxed set of Beethoven’s orchestral music. The mono performance was last available on a Naxos Historical release, coupled with the 1955 mono recording of the Fifth Symphony. The mono Seventh received Legge’s full attention, resulting in superb balance. Just listen to the way the timpani reinforce the climax of the last movement and elsewhere.

The 1955 performance is the fastest of Klemperer’s studio renditions, but this OSR example shaves almost two minutes off it. In both readings, he maintains what has been called his “inexorable forward momentum” without the need for rushing. In both recordings, the conductor, as is usual for him, exaggerates the great double hammer-blows in the first movement’s Allegro. Rather than impeding the momentum, this reminds us that a real conductor is in charge, not a mere time-beater. In every movement, the OSR responds magnificently, playing with great concentration and faithfully producing the conductor’s trademark granitic Beethoven textures. If this is not virtuoso orchestral playing, it is something very close to it.

In the OSR’s third movement Trio, something occurs which I have not noticed in any other Klemperer performance of this music: there is a delightful ‘swing’ and lilt in the playing, achieved without the pronounced slowing down Furtwängler used in his 1950 EMI studio recording.

I am almost certainly in a minority in disliking ‘express train’ speeds in the final movement. My objection is two-fold. Firstly, if the repeat is omitted - as it usually is - a very fast tempo makes the movement sound too short in relation to the rest of the work. Secondly, the faster the speed, the harder it is to maintain full intensity. Furtwängler managed to bring it off in his swift reading timed at 6:54; two seconds faster than Toscanini and the BBC Symphony Orchestra. Walter took it even faster in his Sony stereo recording at 6:43 and didn’t quite bring it off. It was a slightly anti-climactic end to an otherwise great performance. Klemperer and the OSR allow themselves 7:41. It’s true that when they start this movement, one senses a trudge may be coming – but only for a moment. Very soon, there is a feeling of being irresistibly drawn into a vortex by what has been called the conductor’s “terrifying intensity”. One surrenders to it and is swept to an overwhelming conclusion. This is quite the finest Beethoven Seventh I have heard from Klemperer.

Pristine offers an admirable high fidelity mono recording. It faithfully conveys the warm, full, forward sound familiar to collectors of Ernest Ansermet’s recordings from the Victoria Hall. There is a slight tendency for the bass to ‘boom’ on occasion, which is easily ignored. The audience is quiet. Its applause was apparently not preserved in the source of the recording and so is not heard here.

For those who enjoy pigeonholing conductors (e.g. Szell and Toscanini are always fast and taut, with a bright, lean sonority; Furtwängler is always weighty, massive, and darker in color, etc.) Otto Klemperer presents the ultimate challenge. Whether for purely musical reasons, his well-documented manic-depressive condition, or a combination of both, Klemperer can sound like different conductors at different times and places. I own recordings of Bruckner’s Fourth Symphony led by Klemperer ranging from 55:00 to 60:58, and Mahler’s Second from 73:30 to 79:43. The general perception of those who know his work mainly from his EMI Philharmonia Orchestra recordings is to think of his conducting as always on the slow and weighty side, but that is simply not true.

Pristine has made a major contribution to the Klemperer discography with this release of a complete broadcast concert by the Suisse Romande Orchestra from 1957 (with neither applause nor announcements). This same concert was released on the Archiphon label earlier; I have not heard it, but that label’s track record would not encourage me to think the quality is even close to this. The source of Pristine’s issue is a French FM radio rebroadcast, to which Pristine has added its XR processing, creating a bit more space around the orchestral sound. The result is a superb mid-1950s sound quality equal to that of professional studio recordings.

The Hindemith is perhaps the biggest surprise here to those unfamiliar with the conductor’s EMI recording of the work, to which this is similar in interpretive outline. Klemperer’s tempos in this piece are among the fastest on records. Here are a few comparisons from my own collection:

Not only is this performance quick, but it is light-footed, even witty at times. The orchestra plays very well throughout, save for a slightly askew entrance at the onset of the passacaglia finale. This is a performance of sweep and drama, with a rhythmic lift and a degree of intensity not quite present in the EMI recording.

The Bach is guaranteed to upset the HIP specialists, with its big sonority, string playing with a fairly strong vibrato, and the huge ritard prior to the work’s conclusion. Klemperer was from a generation that performed Bach regularly in a style more grand than is the norm today. He recorded the four Orchestral Suites twice for EMI, in 1954 and 1960. The performance here of the Third is freer, more spontaneously inflected, and a bit more joyous than the studio recordings, with the famous “Air” lovingly and affectionately molded.

Klemperer recorded Beethoven’s Seventh Symphony for EMI three times: in 1955, 1960, and 1968—the last being quite slow and weighty. A word often applied to this conductor, “granitic,” would fit all three recordings to varying degrees. That word is less applicable here. This performance is graceful, warmly lyrical and supple in the second movement, and the opening movement is moderately quick and very energetic. While the third and fourth movements are on the slow side, the well-sprung rhythms and an orchestral sonority somewhat lighter in texture than the studio efforts make this a more propulsive reading, and in my view an extremely successful one.

This will self-recommend to Klemperer collectors, but the more general collector may well want to seek it out as an example of one of the 20th century’s greatest conductors operating at his peak. Henry Fogel