BRAHMS Symphony No. 3
BRAHMS Variations on a Theme by Haydn
BRAHMS Tragic Overture

As I suggested in the notes to Horenstein's 1957 Vox recordings of music by Berg and Schoenberg (PASC 445), these earliest of Vox's stereo recordings indicate a degree of experimentation with the new concept of soundstage and twin-channel recording. Both the Symphony and the Variations demonstrated an exceptionally wide image with a distinct "hole in the middle" as a result. A combination of digital phase alignment and a slight stereo narrowing (to about 85% of the original width) has done much to produce a far more satisfying and coherent sound picture in the two German recordings. 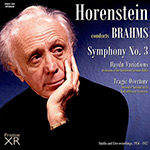 I can say without reservation that this is a stunning Brahms Third ... the recording has outstanding dynamic and frequency response, realistic-sounding channel separation, and, in a word, sounds like it could have been recorded yesterday...

A minor discrepancy regarding the dates of these recordings is immediately apparent. Michael Jameson, who reviewed the Brahms No. 3 and Haydn Variations disc on Vox in 24:1 when it was originally released on CD in 2000, gives a recording date of 1958. Pristine’s program note quotes Jameson’s review verbatim and in full. Yet, with absolute specificity, Pristine’s own documentation gives the dates of this studio recording as October 20–30, 1957. I suspect that 1958 was the year that Vox released the recording on LP, which is the date Jameson cites in his review, and which Pristine simply reproduces without anyone noting the inconsistency between the quoted review and its own documentation. The Tragic Overture comes from a different source, a live radio broadcast by the Orchestre National de la Radiodiffusion Française from November 19, 1956. The performance was included in a nine-disc Music & Arts set that was thrice reviewed, by Henry Fogel and Peter Rabinowitz in 28:3 and by William Zagorski two issues later in 28:5.

Pristine’s recording details indicate that the Brahms Third and Haydn Variations are in stereo, while the Tragic Overture is in ambient stereo, a term I believe is used to describe a mono recording electronically enhanced to simulate a stereophonic effect. The sound of the two works that were recorded in true stereo is quite phenomenal. Undoubtedly, Andrew Rose’s XR Remastering played a significant role, but to be honest, the recording has outstanding dynamic and frequency response, realistic-sounding channel separation, and, in a word, sounds like it could have been recorded yesterday.

As for Horenstein’s participation, I can say without reservation that this is a stunning Brahms Third. Having just finished reviewing a reissued, uninspiring Brahms symphony cycle by Mariss Jansons leading the Bavarian Radio Symphony Orchestra, I marvel at the contrast between Jansons’s Brahms Third and Horenstein’s. The latter’s tempos are faster and the performance potent with gripping drama. Listen to Horenstein’s accelerando in the coda to the first movement; he goes for the jugular. Listen, too, to the spooky, haunted-house sound Horenstein draws from the orchestra at the beginning of the last movement. I never really made the connection before, but it’s a very similar effect to the one Brahms achieves in the eighth variation of his Haydn Variations, which follows the symphony on the disc. Horenstein’s Brahms Third is not only one of the most exciting Brahms performances I’ve heard since reviewing Felix Weingartner’s reading of the symphony, also on Pristine, in 36:2; it’s also a reading that penetrates to the heart of the score and brings this difficult work into focus in a way that many present-day performances don’t.

The Haydn Variations is equally perfectly paced and beautifully shaped. For some reason, however—exactly why I can’t explain, since both works were recorded in the same studio over a 10-day period—the sound quality of the Variations isn’t quite as good as it is in the symphony. There’s a stridency to the violins’ high notes and a bit of overload distortion in loud passages. But the minor sonic shortcomings fade into insignificance in the face of a performance this good. Especially notable are the Southwest German Radio Orchestra’s woodwinds, which are really fantastic in the tricky writing Brahms throws at them. My one major annoyance with this Haydn Variations—though I can’t fault Pristine, since it would have been that way on the original LP—is that the work is afforded a single track, so that the variations are not accessible individually.

For a 1956 air check, the recorded sound of the Tragic Overture is reasonably good, but I can’t say it’s great. The orchestra sounds recessed and flattened out across the stage, with little or no depth of field to the sonic image. Moreover (what else is new?), the French players are not as disciplined as their German counterparts in the symphony and Variations. There are moments here and there of intonation disagreements in all sections—strings, woodwinds, and brass—though not all at the same time, and other moments of un-togetherness in the ensemble as a whole. Horenstein nonetheless perseveres and rises above the orchestra’s limitations to deliver a reading of urgent intensity.

If you can get past the less than ideal sound in the Variations and the Overture, and the less than ideal orchestral playing in the Overture—which shouldn’t be hard to do, given Horenstein’s commanding and inspired readings of these works—you have on this Pristine release documents of a very great conductor who, due to circumstances beyond his control, was never offered a permanent post, and who did not achieve the fame and glory accorded to other conductors of his time.