Getting the best out of Jascha Horenstein's "early stereo" recordings made for Vox in 1957 can be quite tricky. The microphone placing used here means any number of potential compromises are necessary: a brighter remaster sounds more alive, with the brass positively shining, but the strings may occasionally sound a trifle raw and screechy; rein this in and the whole thing risks sounding dull and dead, not helped by an unusually close acoustic. Thus here I've had to tread a careful path to avoid tipping things too far in either direction, whilst maintaining the "Wagnerian weight and breadth" and "tremendous drive" referred to by Deryck Cooke in his review of the original UK LP issue. My thanks, again, to Misha Horenstein for his help and expertise in producing this recording. 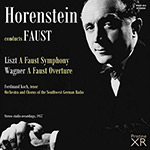 In his rave review of Horenstein’s 1972 BBC performance of A Faust Symphony (Fanfare 16:5), Henry Fogel dismissed this German version from 15 years earlier, claiming that it was “so marred by poor ensemble and intonation from the Southwest German Radio Orchestra of Baden-Baden, and by their inability to maintain tonal intensity, that one had to work to appreciate the conductor’s vision of the score.” There are certainly grounds for his scorn. Tuning can be iffy (try the four solo violins in the middle movement); faster wind figures flirt with, even give in to, mere approximation; key pillars of orchestral sonority often collapse (try the fff trombones at rehearsal Tt in the finale); and major details get swamped (you can barely hear the crucial stopped horns after W in the first movement). Then, too, some of the more lyrical playing (for instance, the opening of the second movement) is surprisingly prosaic—and even some of the grander music, say the alla breve after rehearsal Ww in the finale, can turn dogged and rhythmically heavy-handed. Despite excellent vocal work, the ending is seriously anti-climactic.

And yet no lover of this score should turn down to a chance to hear this performance. Scrappy, yes—but also, at its best, feral in a way that can, at moments, make even Bernstein’s New York recording seem tame. The swift first movement is especially riveting. Yes, Masur takes it at a similar clip; but whereas Masur skates across the music, Horenstein sears it in our memory with sharp melodic profiles, lean orchestral colors, and stinging accents (note how seriously he takes the “violente” marking before rehearsal U). The middle section of the second movement is unusually dynamic, too, and plenty of high drama boosts the finale. The original sound, like that on many Vox orchestral recordings of the time, was screechy; Andrew Rose has done an excellent job of taming its infelicities.

In sum, while this won’t sprint past either of the Bernsteins, the Beecham, or the Rattle among the front-runners for a single recording of the piece, collectors happy with duplication—especially those who appreciate Golovanov’s similarly high-pressure Liszt—should find it a welcome addition to their shelves. The vigorous reading of Wagner’s Faust Overture is an appropriate bonus.