When Philippe Bonin kindly sent me a set of LPs of recordings by the tragic Australian pianist Noel Mewton-Wood, neither of us expected them to end up here. In his covering letter he stated that the discs were in very bad condition, with lots of clicks, crackle, rumble, hum and "other funny things". The piano tone was lacking weight, the orchestra was muddy and the records were said to be dirty.

Picking up on that final point, my first task was to give the discs and exceptionally thorough and deep clean. Judging by the colour of the muck that came off them, I was hopeful that many of the other reported problems would be cured. It's also very pertinent that I used a custom-ground stylus designed not only for the replay of the wider mono grooves of most 1950's LPs (stereo-grooved records require a narrower stylus), but also with a truncated tip, ground specially to avoid any contact with either the bottom of the groove or any microscopic muck still residing there.

The result of this cleaning was transformatory, and I was confident that this, couple with XR processing, could yeild excellent results. I was not disappointed. Despite questionable microphone technique, which favours the piano and appears to regard the orchestra as something of an afterthought, and some very mild tape 'flutter' dropout in one or two places, this recording has come up a treat, and allows the listener finally to really treasure the fine playing and technique of Mewton-Wood.

Philippe Bonin, who generously supplied the LPs for this and future Mewton-Wood transfers, sent this message upon hearing this restoration:

I have listened five times in loop your transfer. Extraordinary! The piano is so glorious (playing AND sound) that I was thinking it might even be as beautiful without the orchestra. I do not know if it is a Steinway or a Bösendorfer, but the sound is there, with the whole range of frequencies; astonishing. Even if the orchestra has rough moments, there are many wonderful ones (like the flute and the cello in the second movement, or the entry of the strings at 1:05 into the last movement). I have seen also that you have fixed the end of the same movement were there was a sudden burst of sound.

I hope you will do the same miracles with the other ones...

Notes on the Orchestra: The orchestra here didn't exist as a regular working body. In fact the original LP credits the similarly non-existant "Musical Masterworks Symphony Orchestra", the kind of name which immediately rings alarm bells as an obvious pseudonym. We've chosen to go with the Netherlands Philharmonic as this more accurately indicates the origins of the players, who were drawn from the three Dutch radio orchestras of the day, something since confirmed by various orchestral members.

Restoration and XR remastering by Andrew Rose at Pristine Audio, May 2008
Cover artwork based on a photograph of Noel Mewton-Wood 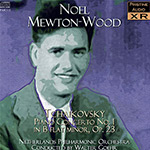