Miles Davis' Kind of Blue is perhaps an unusual choice for a Pristine Audio remastering - it's almost certainly the best-selling jazz album of all time, and there can be few serious record collections which don't own at least one copy of it.

It's also been an album that's been much-remastered. Yet I don't believe that anyone has ever truly mastered its remastering, because some serious sonic problems with the original recording have, for over half a century, never been addressed.

The biggest problem with this album struck me when listening for perhaps the thousandth time (or probably more) back in May 2009. The sound of the piano, my own instrument, was lifeless, flat, and entirely unlike a piano - as if it were fashioned from cardboard rather than wood. The more I listened, the more I realised this was not the only problem, and that it centred around the lower mid-ranges of the instruments, producing a blurred and at times harsh sound in this register.

As an experiment, and for my own listening purposes only, I decided to see what would happen if I applied XR remastering techniques - most specifically re-equalisation and targeted noise reduction - to the recording. The computer tonal analysis revealed what I has suspected, with significant anomalies in the overall sound balance which, when corrected (using other albums by Miles Davis from the period, in particular the 1956 album 'Round About Midnight, as both authentic and better-recorded references), transformed and opened out the whole sound of the album whilst staying true to Miles Davis' 'sound'.

Kind of Blue was original recorded on a three-track tape system, and over the years different stereo releases have varied the stereo width of the instruments. I've opted for slightly less than the full-width approach which can make headphone and close-up listening quite uncomfortable. I've also employed phase correction software to analyses the phase difference between the two stereo channels and adjust for phase differences present between microphones picking up the same instrument. The effect of this is a subtle but distinct sharpening of the stereo imagery.

I've also worked on the fine-tuning of each track, based on a precise analysis of the harmonic frequencies of the piano, noting that tracks on the current 'official' releases are between 0.3% and 0.5% sharp (raising A440 to between 441.3Hz and 442.2Hz). Some minor tape drop-outs, audible from time to time in the cymbals of So What, have been cured. I've also worked hard to reduce tape hiss without compromising the fabulously open sound of the recording. 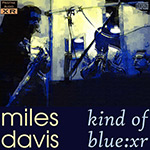