An amazing new approach to acoustic and early electric recordings

"An excellent album, and one I can recommend highly ... We’re bound to want more after hearing such fabulous results" - Fanfare

This collection represents the first outing of a new 'variant' of the XR remastering process, tailored particularly for acoustic 78rpm recordings but also very useful in restoring the earliest electric recordings. In this collection we present ten [*see note below]recordings from the pre-microphone era - recorded directly into a horn - and ten from the so-called 'electric' era of microphone recordings.

By using a specially adapted 'double pass' XR approach I've been able to get much closer to the cleaner finished sound I want using equalisation alone, before bringing in digital noise reduction, whilst simultaneously tackling the problems of horn resonances and very uneven tonal response. Where noise is a huge problem, as on acoustic recordings, this is a real step forward - it allows much better preservation of the musical signal and reduces the risk of producing audible digital noise artefacts in the finished recording.

What's been particularly fascinating about the Armstrong tracks is the realisation that, thanks to the sheer energy and harmonic richness of the brass instruments used, there's much, much more on some of these recordings than one might have expected to find. Normally we see acoustic recordings petering out somewhere between 3500 and 4500Hz, yet in occasional instances of particularly high notes I've detected harmonics right up to 19kHz.

The achievement of the new aspects of XR used for this restoration is to preserve these high harmonics much more effectively than before. Sadly they do generally only exist in the really high-energy instruments when they're playing loudly - we're not suddenly going to unearth CD quality from acoustic horn recordings - but the fact that they're not only possible but clearly audible does suggest that a lot of traditional equalisation of acoustic recordings may have been throwing valuable music content away.

*NB. We've listed four recordings by Louis Armstrong and his Hot Five as acoustic recordings in our CD booklet, though they fall into the period of time when the electrical recording process was being introduced by record companies during and after 1925. This assumption is based on tonal analysis of the recordings, which display the distinctive bass cut-off and the harmonic irregularities typical of horn recordings. The difference in this bass response can be heard most clearly between tracks 10 and 11 in the sound of the tuba, which suddenly has a depth and resonance not previously captured.

However, the treble response of tracks 8-10 is particularly surprising for an acoustic recording and, following restoration with the XR remastering process, the sound has an added clarity more usually associated with microphone recordings. Thus it is possible that these were poor electric recordings rather than good acoustics. Although 1925 is generally regarded as the start of the electric era, some recording companies continued with the old acoustic system into at least 1927, hence the slight uncertainty expressed here. 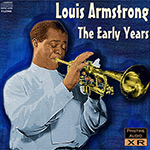 This recent reissue of ancient jazz recordings from Pristine focuses primarily on the first decade of Louis Armstrong’s recording activity, and is in many cases a revelation. Using a new remastering process with a double pass over the archive recordings, they have managed to resuscitate more music from some of these records than has ever been heard before.

Of course, the primary question is, of what value are 80-year-old jazz recordings anyway? The answer is simply that they represent the flowering of a musical genius who wore blinders to the musical deficiencies around him, zoned in on creating solos of a kind that had never before existed in jazz (or any other music, for that matter), and literally wrote the book on the different ways one could play a jazz chorus. While not as harmonically adventurous as some of his contemporaries, particularly pianist Earl Hines, cornetist Bix Beiderbecke, or trombonist Miff Mole, Armstrong surpassed them all in terms of creating new forms, rhythms, and musical drama. Today’s jazz soloists are far more sophisticated and play faster, smoother, and more adventurously than he did; yet his records still have the power to startle and thrill us, whereas theirs only do so intermittently. As a poor boy from New Orleans, Armstrong had the typical Crescent City camaraderie with homeboys that characterizes the city’s jazz to this day. Thus he was always happy working with musicians from his old hometown, even when their playing was clunky and crude compared to his own. This was particularly true of banjoist Johnny St. Cyr and trombonist Kid Ory, two of the least fluent jazz musicians of their day. On their own, they were competent but stiff. With Armstrong to inspire them, they provided at least competent support for his efforts, if nothing more than that.

This disc begins with two recordings that literally floored me for their improved sound, Chimes Blues and Froggie Moore, played by King Oliver’s Creole Jazz Band. These discs were made for Gennett Records, the tiny Indiana label that took on the Goliaths of the record industry, Victor and Columbia, for their right to make lateral-cut records that those two giants claimed as their exclusive process. Through three years of litigation, Gennett persevered, eventually proving that their process was different enough from Victor’s and Columbia’s that they had the right to continue doing so. It was different, all right. Gennett records sounded so awful that even the musicians who made them could barely stand to listen to the playbacks. Pianist/songwriter Hoagy Carmichael once said that even to the living musicians sitting right there in the recording studio, the playback of a Gennett record sounded like something made by dead men in the previous century, artifacts from a lost stone age. Pristine has miraculously managed to elicit a warm sound and relatively natural bass response. For the first time, Bill Johnson’s bass and Lil Hardin’s piano are actually audible, and Armstrong’s cornet rings out with a fairly true tone.

The rest of the collection generally builds in quality from that starting-point; though to be honest, I didn’t feel that the recording of Copenhagen by the Fletcher Henderson Orchestra was too great an improvement over the “enhanced” version that appeared in the 1970s on a French MCA album, “Young Louis—The Side Man.” Yet Bessie Smith’s 1925 Columbia recording of St. Louis Blues brings out more of Armstrong’s horn than any previous version, and I can attest that I’ve never heard the Clarence Williams Blue Five records (also made for Gennett) sound this good, ever, and this version of Cake Walking Babies is not the more famous November 1924 recording, on which Sidney Bechet’s soprano saxophone almost drowns out Armstrong, but a remake from January 1925, on which their positions from the horn are reversed. Armstrong responds with one of his most inspired final choruses of the period.

This set includes four tracks by Armstrong’s legendary recording band, the Hot Five, and two by the Hot Seven. The first group is treated as if they were acoustics because there is little or no bass response to draw out. The Hot Five’s rhythm section consisted of only banjo and piano. On these records, Pristine has made the unusual decision to raise the pitch a half tone, which means that Muskrat Ramble and Heebie Jeebies are now played in A♭, not in G. This would have been, of course, a more natural key for cornetist Armstrong to play it, but I question whether Kid Ory could have played in A♭ at all. He was strictly an ear player with a crude, self-taught technique; keys like A♭ would not have been comfortable for him, but G would be. Cornet Chop Suey was described by one classical trumpeter (I forget who, it might have been Gerard Schwarz) as a “classic set piece” for the instrument. It shows off young Louis’s technique pretty well.

The real stunner among the 1926–27 recordings is the Hot Seven performance of Potato Head Blues, long considered to be Armstrong’s greatest solo of the series. (Actress Tallulah Bankhead used to play a copy of the original record every night in her dressing room before performing on Broadway at that time.) Pristine’s remastered version is so startling in sound quality that I had to listen to it three times in succession. Twelfth Street Rag is taken at a slow blues tempo, not the usual frantic pace, with Armstrong fractioning the time in such a way as to boggle the imagination. It, too, sounds uncommonly good.

West End Blues is beautifully remastered, but I have a version made several years ago by the Australian sound engineer Robert Parker that I feel is a shade better. Both bring out the beauty of Armstrong’s trumpet and Earl Hines’s piano, but the Parker version added just a touch of artificial ambience that made it sound more like a real performance to my ears.

After West End, however, the offerings tend to decline in importance. I would much rather have had the excellent Armstrong/Hines duet on Weather Bird than I Can’t Give You Anything But Love—nice as it is—and the final two tracks by Armstrong’s swing-era big band are not as superb as some of his other records from the period, for instance Swing That Music, Ev’ntide, or Struttin’ with Some Barbecue. Here the remastering is, to my ears, just a shade better than that which MCA did for their last big jazz series before the label collapsed.

All in all, however, this is an excellent album, and one I can recommend highly. Pristine has done collectors a great service by restoring the sonics of the old Gennetts especially, which unfortunately opens up a can of worms. To tantalize us this way and give so little! It’s unfair. Gennett’s sound quality was abysmal, yet in those years they were the jazz label of choice for collectors, preserving early Bix Beiderbecke, Jelly Roll Morton, the New Orleans Rhythm Kings (and their genius clarinetist, Leon Roppolo), as well as very early Duke Ellington. We’re bound to want more after hearing such fabulous results.