Despite the source material for this transfer - a German 10" Decca pressing - being in excellent condition, it was hard at first to hear quite what might have earned Münchinger's Haydn 45 a starred entry in 1955's The Record Guide. The sound was of a dullness which seemed to pervade and almost overwhelm the performance.

What a difference, then, the tonal rebalancing inherent in XR remastering made to this rather fine performance! We note that the authors of the aforementioned Guide stated "...the performance would have received a double star but for a certain lack of sprightliness, and for passages in which the string tone sounds thin..." - and cannot help but feel that this remastering does much to address both of these criticisms.

If one adds to that the way that Ambient Stereo processing opens out the soundscape and we find a truly delightful performance of this favourite Haydn symphony lurking in those early fifties grooves. Finally, I'll turn to the Gramophone reviewer's comments, which serve to remind what a different choice landscape the record-buying music-lover scanned some 57 years ago: "...the performance is elegant and poised; and is recommended on its own merits, not simply because it is the only version obtainable."

Also issued in the UK as part of Decca LP LXT2669
Transfer and XR remastering by Andrew Rose at Pristine Audio, March 2009 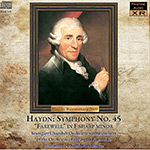