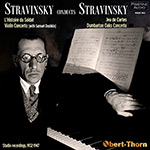 Valuable for its sterling presentation of the Violin Concerto