BARTÓK String Quartet No.1 in A minor

"BELA BARTOK considered that the Juilliard Quartet gave the most convincing performances of his Quartets that he had ever heard."

After our release earlier this year of quartets by Schoenberg, Berg and Webern (PACM 087), recorded by the Juilliard Quartet for early LP releases on Columbia, a number of people asked me to look at the Bartók they'd covered a couple of years earlier. These were very early days for both tape and vinyl, yet Columbia did an essentially fine job in capturing the Juilliards.

This new XR remastering has corrected some quite severe pitch-droop during the second half of the second quartet, as well as general instability not uncommon with the new tape technology. I've reduced tape hiss relatively gently, aiming to preserve as much of the air as possible in the strings - upper harmonic tone which has been greatly revealed by the XR remastering process, giving the sound a vitality lacking in previous editions, yet which is essential for so much of this remarkable music. 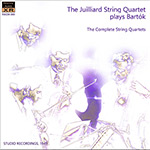 Download Artwork
Download Artwork
It is good news that at long last the Juilliard’s splendid set of the Bartok quartets, issued some time ago in the States, is to be released here ; for the absence these works was one of the most glaring lacunae in the catalogue. Fantastic that only one of the six should have been available on LP until now ; but, with due acknowledgment to Argo’s enterprise in the matter, their recording is quite outclassed by the new one, which also works out more economically with two quartets on a 12-inch disc instead of one on a 10-inch. Incidentally, I should have thought that the Juilliard’s publicity manager (or whoever it is) might have secured the issue of this disc prior to the Quartet’s appearance in this country last month : as it is, it will have to serve as an inspiring reminder of the visit of a first-rate ensemble. For of its quality there can be no doubt whatever : these are readings of the first two Bartok quartets which are authentic in style, extremely fluent technically without ever descending into mere slickness, and beautifully polished. There is presumably no need at this juncture to say anything about the works themselves, which are universally recognised as among the great landmarks of the chamber music repertoire, There is a warmth of tone and a sympathy about the Juilliard’s performance which, if it rather tones down the barbaric element occasionally, heightens the music’s expressive quality : the forceful sections are not allowed to assault our ears too mercilessly, and in the first movement of the Second Quartet we are led to agree with Mátyas Seiber that in its romantic intensity it “ remains one of the most beautiful pieces Bartok ever wrote ”. Connoisseurs of ensemble playing will admire the unfailing unanimity of thought and execution apparent here: such passages as the pp prestissimo ending of the second movement of No. 2 are a real tour de force. The recording is a bit ungenerous to the first violin, whose very high register sounds noticeably weak, but otherwise it is entirely acceptable and well balanced.

"As Edgard Varese, John Cage and Pierre Henry were moving the argument on, kicking down the doors of perception about what music could be - or kicking doors literally in Pierre Henry’s case — music lovers the world over were still struggling to reconcile themselves with Bartok, Schoenberg and Webern: how their music linked into the ‘classical’ tradition as they knew and understood it.

Columbia Records was under no obligation to give anybody any answers about this new music, but that a company with Frank Sinatra and Tony Bennett on its books chose to record the first cycle of Bartok’s string quartets is symptomatic of a wholesome core belief in music. Buy ‘The Voice of Frank Sinatra’ and you were subsidising the Juilliard Quartet's Schoenberg, Ol’ twelve-tones is back...

Until now I hadn’t quite grasped how luxuriantly warm the Juilliard’s take on the first movement of Bartok’s String Quartet No 1 sounds. The queerly dislocated voicings of the Second Quartet’s last movement and the muffled, vibrato-less clusters that subliminally launch the Third Quartet are outlined in stark, point-of-view detail here: a weightless hover that sounds electronic...

The pinball-machine violence of the Fourth Quartet’s Allegretto pizzicato movement and the Fifth Quartet’s Alla Bulgarese Scherzo tell us the same thing - that the Juilliards were prepared to act against long-cherished assumptions about how string quartets ‘ought’ to behave. ‘Bartok-pizzicatos' (the string is snapped against the fingerboard) trash ‘classical’ politeness with delirious physicality; the lyricism of the Sixth Quartet is quarried with equal grit. The Juilliard Quartet don’t do coy. Bartok’s melodic writing is non-generic and unsettling. You can hear the quartet trying to work out why..."

POSSIBLY the release of the year is the three-disc L.P. set, just recorded by Columbia, of the six string quartets by Bela Bartok, played by a young foursome named the Juilliard Quartet. The latter derives its name from the fact that its members all studied at the Juilliard School of Music in New York: they are, for the record, Robert Mann and Robert Koff (violins), Raphael Hillyer (viola) and Arthur Winograd (cello). It goes without saying that they form an efficient ensemble ; nobody would dare approach such difficult scores without utmost confidence plus the technical ability to back it up.

In an effort to meet this magazine’s deadline I devoted an afternoon to listening to all six quartets : a foolhardy thing to do. What resulted, despite some previous acquaintance with the music, was a jumbled impression, quite surrealistic in nature, composed of bits of sensory remnants— lyricism, moments of frighteningly concentrated savagery, Hungarian tunes nightmarishly distorted, late Beethoven, polyphony, almost insuperable technical complications, a mighty rhythmic pulse, shocking dissonance, uncanny sounds and tonal juxtapositions, enormous string glissandos. But above all there was strength and imagination and feeling. You may shrink in horror from Bartók’s uncompromising approach, and the dissonances may grate on your nerves. Yet the quartets form a sextet that cannot be ignored. They are great music, really great music. Popular they may ; ever be, but a certain music-experienecd segment will be studying them with fascination for years to come. The present recordings are superbly managed. It is interesting to note that each quartet, uncut, occupies a single side, which means that in the cases of the first and fifth, Columbia has engraved about a half hour of playing time on one twelve-inch face.

The real attraction of this cycle is its joy of discovery, which remains completely fresh and vivid

The Juilliard String Quartet was a perfect fit for the American Century, musically speaking, and like two other icons of the time, Leonard Bernstein and Van Cliburn, it was a postwar phenomenon. Its reputation was made by this complete set of the six Bartók quartets; that appeared in LP form in 1950 from Columbia Records, who had successfully launched the new format in 1948. Contrary to popular belief, the performances were recorded on large 78-rpm shellacs rather than tape, and subsequently Columbia released the set as six 78 records—one of the few times, I imagine, that 78s came out after an LP release.

What we hear, then, are live, unedited readings done in 1949 at Columbia’s 30th St. studio. The Julliard Quartet was founded in 1946, the same year as the Juilliard School of Music (it had previously existed as a graduate school). Its inception was due to the school’s president, William Schuman, suggesting that four faculty members—Robert Mann and Robert Koff, violins, Raphael Hillyer, viola, and Arthur Winograd, cello—form the ensemble. Schuman also persuaded Serge Koussevitzky to host their first public appearance at Tanglewood in 1947. They returned the following summer to perform the six Bartók quartets in private concerts for students.

Going into the studio was an exciting event. Only one of Bartók’s quartets had been recorded more than once, and when the composer died in New York City in 1945, his music, always admired in Modernist circles, was beginning to capture wider popular appeal. Mann, a great enthusiast of Bartók, had been present at the premiere of Quartet No. 6 in Town Hall in January 1941. When the young Juilliard performed the first-ever public cycle of the quartets in Times Hall in early 1949, the audience was packed with musical luminaries, including (believe it or not) Dmitri Shostakovich, who had come to the U.S. as part of a Soviet peace delegation. Also present was Goddard Lieberson, the visionary Columbia Records producer who gave us the complete Stravinsky conducted by the composer as well as a Broadway cast recording of Bernstein’s Candide, even though the show had been a commercial flop. The stars were aligned for the historic Juilliard recording sessions, and these, too, attracted some notable invited guests, including Jascha Heifetz, who reportedly made astute comments about tempo relations in Quartet No. 4.

By the time the Juilliard made its famous and now standard stereo version of the complete quartets in the 1960s, only Mann and Hillyer remained of the founding members. Knowing just the stereo cycle in my student years, I was astonished at the added freshness and intensity of the 1950 mono set—by chance, a compilation CD from Sony happened to include the older Fourth Quartet. Once the 1960s cycle took hold, the 1950 one fell away and didn’t appear on CD until the small English reissue label, Pearl, took that step in 2001. (I’m indebted to the assiduous Pearl program notes for the historical details in this review.) To my knowledge the best-sounding set now in print is from Pristine Audio; the Pearl issue is out of print, and I believe the label must be defunct.

String quartets were notoriously difficult to record faithfully at the time, and reissue labels, lacking access to the original masters, work from a collector’s 78s or LPs. The chief flaws to overcome here are lack of depth in the cello part and thin upper register in the violins. Producer Andrew Rose has managed to make the original sound lively and very present, with added space around the instruments using Pristine’s XR ambience, yet the cello is still under-represented. As its members approached the scores—we’re told that Quartet No. 1 and No. 6 were the easiest to learn, the finale of No. 5 the most intractable—the Juilliard had the advantage of two authorities in matters of style, the composer’s son Peter and violinist Jenö Léner, founder and leader of the famed Léner Quartet in Hungary in 1918. As a member of the later Kolisch Quartet, Léner had been part of the premiere of the Sixth Quartet. No doubt it was invaluable, stepping into Bartók’s unique sound world, to learn almost first-hand how to play the special bowing and pizzicato techniques he had invented.

I’ve spent most of this review describing the remarkable circumstances surrounding the historical importance of the Juilliard’s first cycle, taking it as a given that the ensemble deserves its renown in Bartók, whom it approached in 1950 with warmth and sometimes even Romanticism. Its impeccable execution set a new standard for its day. In the current marketplace you can hear a variety of styles for interpreting these six great works of 20th-century Modernism. With glint-eyed efficiency, even the Juilliard’s fame for virtuosity has been surpassed. For me, the real attraction of this cycle is its joy of discovery, which remains completely fresh and vivid. Pristine offers the recordings on CD or as downloads at various speeds (mine was a 16-bit FLAC file); each disc can be ordered separately.

This article originally appeared in Issue 40:5 (May/June 2017) of Fanfare Magazine.