This recording of Bartók's fifth quartet is not only rare, but also of vital importance to the understanding of this work. The leader of the Hungarian Quartet, Zoltán Székely, was a close friend of the composer (and a composer himself), and although the Quartet was premiered by the Kolisch Quartet, in later years Kolisch himself would usually turn to recordings by the Hungarian Quartet in his seminars. As such it seems safe to say that this inexplicably neglected recording is perhaps comes as close as is possible to being definitive.

The recording was released on HMV's plum label on 3rd October, 1946 and, despite being a lower than premium-priced release, was promoted in the October issue of The Gramophone with a full-page advertisement on the magazine's back cover.

That same issue of The Gramophone also printed a review of the recording, which is fascinating in its discussion of the subject of the composer himself and the work in question - clearly many readers of the day would have great difficulty with a work as 'modern' as this, and the reviewer clearly goes to some considerable effort to explain why this music is both important and relevant.

And yet the conclusion of the review, where he mentions this recording, is somewhat ambiguous - the writer can suggest nothing more than that he 'imagines' that the performance 'fully realises the composer's intentions at all points'! One can only assume he was new to the piece himself. 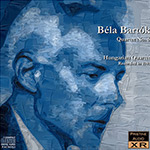 The playing and interpretation of the quartet ... is masterly and, I imagine, fully realises the composer's intentions at all points

No sensible man would attempt to climb a difficult mountain without first getting into training, reconnoitring, learning all about it he can. I should like, therefore, strongly to urge the intending purchaser of these records to buy also the score of the quartet and Matyas Seiber's little booklet about Bartók's six string quartets which costs only half-a-crown (Boosey & Hawkes). The October, 1945, number of "Music and Letters" also contained an admirable article on "The Bartók of the Quartets," by Gerald Abraham.

We enter a world here which challenges at every step any easy conception of beauty in music and gives point to a young man's remark that "Bartók cuts through the complacent, sentimental facade of so much music to the harsh, vigorous primitive." I should qualify that remark by adding that it is the demand of a certain type of listener, who looks only for sensuous beauty in music (an attitude which implies a considerable degree of self-gratification) rather than music of marked sensuous appeal itself that is disagreeably complacent and sentimental. Bartók's quartets, whether one likes them or not, are for mature musical minds and as it is generally recognised that "he has put into them the very best of himself," to greet them with vulgar abuse is to condemn oneself, not a great composer.

The fifth string quartet is the most accessible after the second, and' any constructional difficulties it may seem to contain yield to a short study of the score. Canonic and fugal writing often appear and according to Matyas Seiber "the stress has been shifted from expression in the earlier works to architecture and construction." I think this side of the matter may well be over-emphasised, enormously important as it is to the music student. As Gerald Abraham says, this is not paper-music, and it certainly is not merely the result of intense cerebration.

Turn to the first of the two slow movements and you will find a world of intense feeling. You will also find, near the start, a marriage of the ancient modes (in the three under-parts) to the modernistic chromatic melody above that represents a perfect integration of the. two things. Bartók shows this in his simplest, as well as in his most complex, pieces. Folk music entered into his musical blood stream and became absorbed there. Go on to the scherzo, alia bulgarese, with its nine-eight rhythm, organised. into 4 + 2+3, and you will find it opening and closing with an arpeggio that is one of the fundamental things of music. .

The shimmering Trio of this movement is one of the most original pieces of writing in the quartet, though it is surpassed by the second of the slow movements, in which the pizzicato glissandi create an effect which recalls the Indian Vina.

The music, apart from a harmonic idiom that may disturb some ears, is so logically presented that, in outline, it is not difficult to follow. Thus the percussive opening bars of the first. movement keep breaking in, with different treatment throughout, and form a most dramatic end to the movement.

The last movement has a tremendous drive and energy which give all the more point to the ironic little section "in A major, pure and simple," marked allegretto, con indiffereenza, that comes just before the coda. It creates, as Seiber well says, a kind of "surrealistic" effect.

I hope seriously-minded music lovers will respond to the gesture H.M.V. have made in recording this fine work on plum-label and thus bringing it into reach of students not too liberally endowed with the goods of this world.

Of the playing and interpretation of the quartet by the Hungarian quartet, I can only say that it is masterly and, I imagine, fully realises the composer's intentions at all points. The recording, also, is extremely good.