Walton conducts his own Belshazzar's Feast

"Superbly taken, with Walton's conducting even more electric and impulsive than in his later stereo version, and with Dennis Noble unsurpassed as the baritone soloist. The 'writing on the wall' sequence has never sounded creepier"
- Gramophone Good CD, DVD and Download Guide, 2007

This premiere recording of Walton's Belshazzar's Feast, with the composer conducting, is remarkable in many respects. It owes its existence to a degree to the work of the British Council, who had commissioned a number of recordings with which to promote British culture during and after the Second World War (they began this series in 1942 with a recording of Moeran's Symphony in G minor).

Thus it was that in early 1943 the legendary producer Walter Legge managed to assemble the full forces required to record the work - full orchestra, chorus, two brass bands, organ and soloist - and with Walton at the baton the recording can only be described as definitive. It's also interesting to note that Walton later revised the work considerably - first in 1948 and then, to a lesser extent, in 1959 (the year that Walton conducted his second, and first stereo, recording).

The recording was well-received - this is the review in The Record Guide of 1951 (which gave it a star):

"The text of this oratorio was selected and arranged from the Book of Isaiah by Sir Osbert Sitwell. There is some beautiful and quiet choral writing near the opening of the work, but the rhythmic ferocity of the finale recalls the first movement of the [first] Symphony. The piece is a tour de force, and when adequately performed (as in this set) it is irresistibly exciting. Considering the high dynamics, and the weight of the combined orchestra and chorus, the recording of this strenuous work is a considerable engineering feat." 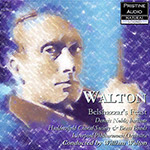