Sometimes I transfer and remaster recordings for purely selfish reasons - the simple desire to play the records and then hear them in their full glory after remastering. This is one of those occasions: one of my favourite chamber ensembles playing some of my favourite music. I had not read the review reprinted here until I was intimately acquainted with the recordings, and I'm happy to see my own judgement mirrored.

The records were all appeared in mint condition and played perfectly. Pitching was unusual however: it's hard to believe the quartet played at the unusually high pitch of A4=~450Hz at which some of these recordings were found, leading me to suspect errors in EMI's 1982 transfers. Here they're pitched to concert standard 440Hz. I also noticed the acoustic being "on the small side" and have helped open it out slightly.

XR remastering has performed wonders with instrumental tone, with the final results bringing me the great personal satisfaction and enjoyment I'd hoped for. 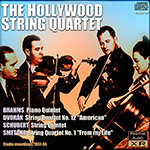 These legendary recordings have been out of circulation for more than two decades, and their return cannot be too warmly welcomed. For younger readers the Hollywood Quartet flourished briefly during the early years of the long-playing record. Its leader, Felix Slatkin (father of the conductor, Leonard Slatkin) was a pupil of Zimbalist and Remer, and in 1937 became leader of the 20th Century Fox Orchestra. All the members of the Quartet were principals in various Hollywood film studio orchestras, and the ensemble did not attract attention outside the West Coast of America until the advent of LP when they recorded such repertoire as the Walton A minor Quartet and the Sixth of Villa-Lobos (Capitol mono CTL7004,6/51—nla) and the Prokofiev Second coupled with Hindemith’s Third (CTL7016, 4/52—nla) in performances which I do not believe have been surpassed.

On its first appearance in 1952, the authors of The Record Guide, Edward Sackville-West and Desmond Shawe-Taylor, hailed the Schubert String Quintet (with Kurt Reher as second cello) as "one of the very best in the discography of chamber music", no small claim but one that does not seem to me overstated. I have periodically played this version over the years and with unfailing satisfaction for apart from their technical finish and perfect ensemble, they seem to penetrate further below the surface than do most of their rivals. I have also long admired their account with Victor Aller of the Brahms F minor Quintet, which it so happens that I played to a visitor quite recently. (My original copy bore traces of flutter that proved particularly irksome on the piano in the slow movement, and I was delighted to find that the present transfer has no such defect and has a wider range.) It is a powerful and thoughtful performance, and holds its own against such distinguished rivals as Serkin with the Busch Quartet (World Records mono SHB61, 4/81) from the 1930s, and the 1969 Eschenbach / Amadeus (DG 2535 418, 2/81). It certainly has more concentration and poetry than the (to my mind much overrated) version by Poilini and the Quartetto Italiano (DG 2531 197, 9/80).

The Dvorak originally appeared in harness with the Third Quartet of Dohnányi, and my first reaction was to regret that EMI had not left this coupling undisturbed — until, that is, I heard the Smetana. Both these performances were new to me and both strike me as hardly less superb than their companions. The style of these artists has dated much less than many other ensembles: they possess splendid attack and finesse, superb blend and flawless intonation, though there is at times an unrelieved intensity and glare in the leader’s tone. The sound is remarkably good for its period with plenty of presence and body, though the acoustic is on the small side. Much care has been taken with the transfers and the sound is first class. Those who recall the originals will need no promptings from me to invest in this set. Let us hope that EMI will follow it up with the late Beethoven quartets and an anthology (which will involve no threat of excessive duplication) with, perhaps, their Hindemith, Villa-Lobos, Prokofiev, Schoenberg's Verklärte Nacht and the Shostakovich Quintet. In the meantime, this is recommended with enthusiasm.