"I must recommend it. The critics hated it at the time, but this was a helluva concert" - Fanfare

I found considerable variation in quality between the various sections of this recording, which would have been cut directly to acetate discs, and in preparing this remastering have endeavoured to eradicate these differences. This involved greater and lesser applications of noise reduction, often targetted at specific frequency bands, following a general re-equalisation to bring out as much of a natural and clear sound as possible. At times there was also a degree of reconstruction and acetate swish removal required, but on the whole this was a well-preserved set of recordings, with good extension in both treble and bass. 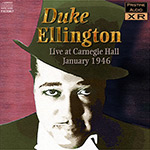 That Ellington and his forces rose to the occasion, big-time, is apparent from the very first notes of this concert...

Of the five Carnegie Hall concerts that Duke Ellington gave between 1943 and 1948, this one had the highest degree of danger about it for three reasons. First, many of his brightest and most famous stars were not present due either to severe illness (trombonist Joe “Tricky Sam” Nanton) or defection (clarinetist Barney Bigard, trombonist Juan Tizol, tenor saxist Ben Webster, and trumpeter-violinist-singer-dancer Ray Nance), and their replacements for this concert (respectively, Jimmy Hamilton, Wilbur de Paris, Al Sears and Shelton Hemphill) were less tonally individual and more classically oriented in training and technique. Second, partly as a result of these personnel changes, Ellington was able—with the energetic assistance of his “musical alter ego,” arranger-pianist Billy Strayhorn—to inject a more genteel sound and classical structures into his music (A Tonal Group, whose central piece, “Fugue-a-ditty,” made a tremendous impression on young John Lewis, who later cited it as a primary influence for his decision to found the Modern Jazz Quartet; the new arrangement of “The Blues” from Black, Brown and Beige; and the elegant, non-jazz-like Transbluency and Magenta Haze). And, third, he was facing a postwar audience which had been through personal and emotional hell, and which wanted to be uplifted and entertained, not educated in the ways of “symphonic jazz.”

That Ellington and his forces rose to the occasion, big-time, is apparent from the very first notes of this concert. Despite the recent scrambling to fill spots and make accommodations for new members, the band never sounded as consistently alive and swinging in any of its other Carnegie concerts—granting individual moments of brilliance, of course—as it does here. None of Ellington’s other versions of Caravan, with the exception of the original 1937 recording, is as great as the one here, and part of its appeal is the spectacular and oft-overlooked clarinet solo of Jimmy Hamilton. But Hamilton is scarcely alone; all of the soloists are at their jazz best, none of them are coasting, and every note of every selection is electrically alive.

Singer Joya Sherrill is simply spectacular in “The Blues,” not only vocally but in being completely zoned into the music in a way that Marie Ellington in 1944 was not. The terraced dynamics and excellent yet subtle classical structure of Sono is another concert highlight; I wonder if the Ellington band ever had such tonal unity and bite as it does here. Although bassist Junior Raglin was a fine musician and an expedient successor to the ill-fated Jimmy Blanton, it’s certain that with the possible exception of Charles Mingus, who only lasted in the Ellington band two weeks and probably never played duets with the leader, no Ellington bassist ever succeeded Blanton as well in Pitter Panther Patter as Oscar Pettiford does. Al Lucas plays bass behind Hamilton on Air-Conditioned Jungle, and his more classical pizzicato is deliciously attuned to this piece.

On part 2, it’s interesting to hear Take the “A” Train without Ray Nance’s patented trumpet chorus, played by Nance himself from 1941 through 1945, then in later years note-for-note (thought not with exactly the same rhythmic feel) by Cootie Williams after his return. The trumpet spot is played here by Duke’s famed high-note screamer, Cat Anderson, and it is one of his most inspired solos. A Tonal Group, obviously showing the subtle harmonic and coloristic influence of Strayhorn, is a masterpiece of understatement. In “Melloditti,” Lawrence Brown’s gorgeous, Tommy Dorsey-like trombone and Johnny Hodges’s alto sax take center stage. Lewis’s favorite, “Fugue-a-ditty,” is actually a slow piece, far from the excitable fugues of Buxtehude, Bach, and Beethoven, beautifully played sans rhythm section through most of it. This was the first time in nine years that Ellington revived his remarkable, forward-looking composition Diminuendo in Blue/Crescendo in Blue, given here with the slow-moving Transbluency (“A Blue Fog You Can Almost See Through”) as its interlude. The idea was ingenious, making it seem more like a mini-symphony with a middle slow movement, and the execution is flawless—even in 1956, the trumpet section did not play the rapid triplets in Diminuendo as flawlessly as they do here—but even Ellington’s Boswell, Stanley Dance, admitted that it was an artistic error since it robbed the dual composition of rhythmic consistency. In the finale, Riffin’ Drill, all the soloists are in brilliant form. Overall, as a total concert, the Ellington forces seldom exhibited such consistently inventive jazz.

Making A-B comparisons to the same concert issued 31 years ago on LP by Prestige, one hears far greater solidity in the bass (particularly on In a Mellotone) and somewhat less harshness in the treble, though in some ways this is not as spectacular remastering as the one Andrew Rose did on the 1944 Carnegie concert. The hall acoustic is more natural sounding here; the saxes do not “swim” as badly as on the Prestige release; but I did feel that the open trumpet intro to “The Blues” sounded a little harsher here, and there’s a slight scratchy sound behind Sherrill’s vocal. Perhaps, in some ways, opening up the sound sometimes exposes flaws that the slight muddiness of previous transfers covers. In relistening to the Prestige version of “The Blues,” for instance, the odd, soft, harsh sound is simply background ambient noise. There’s also a slight amount of buzz, not as intrusive, behind Kay Davis in Transbluency. However, these are the only two problems among the transfers and, as this recording does not seem to be currently available elsewhere, I must recommend it. The critics hated it at the time, but this was a helluva concert.