This excellent recording from mainly clean acetate discs has really opened out thanks to the application of the XR remastering system. I took several modern recordings of music by Ellington as starting reference points with the aim of finding as much authentic fidelity as possible in the older recording. I was also able to deal with the mild surface noise, scratches etc., as well as correcting pitch thanks to the detection of residual 60Hz mains hum in the original - previous issues of this recording ran slightly fast. 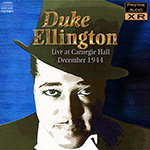 I highly recommend it to anyone with an interest in Ellington or these particular pieces; you will not be disappointed

The late bandleader/pianist/composer/arranger Duke Ellington has achieved almost mythic status since his death in 1974. Many jazz musicians and crossover composer/conductor Gunther Schuller consider him the greatest jazz writer of his time. Bassist/composer Charles Mingus, who succeeded Ellington and exceeded many of his accomplishments, once said that he heard and absorbed everything that Duke had ever done. Yet the recorded legacy often remains a puzzle for those who come to his music without full or prior knowledge of what he did or tried to do. So many of the records simply sound like good hot dance music, cleverly arranged, and some of his extended works have a certain coy or precious quality about them.

There are several explanations for this. First and foremost, Ellington always loved to watch dancers—black or white—enjoy his music and move their bodies to it. You can see him watching dancers out of the corner of his eye in his 1930 short film made at the Cotton Club, and I saw him do the same thing when I saw him in person in the spring of 1973. Second, Ellington was self-taught in classical forms, mostly absorbing them from listening to the crossover music of George Gershwin, James P. Johnson, and William Grant Still. But third, and perhaps most important, he never really wanted to create black classical music per se. His goal was to create a new kind of music based on dance and the blues, force-fed into a structure loosely recognizable as classical, and colored by the unusual timbres of the specific instrumentalists in his band.

Of course, he had to live with changes in personnel throughout his half-century career, and as time went on it became more and more difficult to find players who had what he called “a touch of color” to their playing. He compensated for this by writing lighter, more elegant, more sophisticated music for their more sophisticated replacements. At one point, in the late 1940s, his band was so classically oriented that he could pull off a piece like Transbluency without batting an eyelash, but the gutsy core of the music was gone. Realizing his error, he began restocking his orchestra with players who could at least simulate the quirky, freak playing of some of his earlier band mates. This is one reason why Ellington’s music has never sounded the same since his demise. Without players who had pungent tone qualities, a good 50 percent of his music’s quality dissipates into thin air.

This particular concert, the second of five he gave at Carnegie Hall, came after 15 years of constant experimentation with larger forms of music based on classical principles but also rooted in the blues, shouts, and stomps of African-American culture. There were many successes, among them Creole Love Call, The Mooche, Creole Rhapsody, Blue Feeling, and Diminuendo and Crescendo in Blue, but also two spectacular failures, his 1935 Reminiscing in Tempo and his most ambitious work to date, Black, Brown, and Beige, which premiered at his first Carnegie concert in 1943.

The critics, for the first time, had lambasted him on Black, Brown, and Beige. Stung and hurt, he retreated behind his wall of smiles, urbane charm, and put-on compliments to rethink and rewrite it. This was the concert in which he presented the edited version, which most now consider the very best music in the suite and some of his best performances of it.

Of course, the preceding four years had also coincided with an astonishing period of creativity within the three-minute limitations of popular dance music. Parading them as typical dance-band works, Ellington turned out gem after gem for a band that he considered his finest; but by the time of this concert, the orchestra changed yet again. The nucleus of it still remained—cornetist Rex Stewart, trumpeter/violinist/vocalist Ray Nance (he also danced, by the way; his nickname was “floor show”), wah-wah plunger trombonist Tricky Sam Nanton, and the “black Tommy Dorsey,” Lawrence Brown; saxists Johnny Hodges, Otto Hardwicke, and Harry Carney, guitarist Fred Guy, and his musical alter ego, arranger Billy Strayhorn. But a lot of character was also missing. Gone were plunger trumpeter Cootie Williams, valve trombonist Juan Tizol, Creole clarinetist Barney Bigard, trumpeter Wallace Jones, tenor saxist Ben Webster, bassist Jimmy Blanton, and even his childhood friend, drummer Sonny Greer. Their replacements were good musicians but more standardized in tone color.

Nevertheless, this concert has to rank among Ellington’s great successes. It was the last time, for instance, that he was able or willing to present Creole Love Call in its original form with a singer, in this case coloratura soprano Kay Davis. He gave the premiere of his own full-band arrangement of his son Mercer’s Things Ain’t What They Used to Be, a new suite that featured a finely crafted little sonata by Billy Strayhorn, a remarkable (and seldom-heard) piece for Lawrence Brown (Blue Cellophane), and that marvelously rewritten Black, Brown, and Beige. For all the occasional coyness of Ellington’s music, all he had to do was to produce something as remarkable as this version of Come Sunday, a mini-concerto in 11 minutes, and all was forgiven. His genius may have sputtered at times, but it was indisputable.

After giving so much background, I won’t spoil it by trying to describe the music itself, except to say that for me this concert, like the 1940–42 Victor recordings, the 1956 Newport Jazz Festival set, Night Creature, Such Sweet Thunder, and The Far East Suite, represents the highest pinnacle of achievement in his long career. Allow Ellington some leeway and let yourself accept this music as dance and blues lifted to the heights of art rather than classical music trying to fuse itself with jazz—only Mingus really pulled that stunt off—and you’ll be delighted by what you hear, especially in this new remastering by Andrew Rose of Pristine Audio. The CD is titled, by the way, “Duke Ellington—Live at Carnegie Hall.”

Carnegie Hall had wonderful acoustics for a symphony orchestra, but it was quicksand for a jazz band. Only the brass, clarinets, and drums recorded clearly. Saxophones in particular were sucked in instead of expanding outward, and neither a plucked bass nor a piano set within a rhythm section, rather than forward on stage as a concerto soloist, picked up very well. Mr. Rose has astonishingly restored the missing bass frequencies, rolled some of the shrillness off the trumpets, and evened out the sax sound. Exactly how he pulled this off, I can’t even begin to guess, but anyone familiar with this concert from its past issues on Prestige will be more than pleased, they will be stunned. Even Ellington’s spoken introductions have greater depth to the voice than in previous issues, and Rose has corrected the pitch of the concert, which previously was issued slightly sharp. I highly recommend it to anyone with an interest in Ellington or these particular pieces; you will not be disappointed.