Arcangelo Corelli (1653-1713) was one of the shining geniuses of the baroque era. Born a generation before Bach, Handel and Scarlatti, little is known of his life beyond his musical contributions - he has been variously titled Founder of Modern Violin Technique, World's First Great Violinist and Father of the Concerto Grosso.

As the 300th anniversary of his birth approached clearly interest in Corelli's music was stirring. This set of Concerti Grossi had its US premiere in 1951, almost 250 years after its composition, and the pioneering independent record company, Vox, marked the composer's 300th anniversary with a set of three LPs from which our reissue is drawn. In both the Carnegie Hall premiere and on this recording, the conductor was Dean Eckertsen, who had drawn together the Corelli scores and "filled in the important markings which the composer had omitted according to the customs of the time", according to the sleevenotes.

Certainly his work was well received - writing in the New York Journal-American, Miles Kastendieck wrote: "Eckertsen's labour of love is fruitful. He has placed musicians and music lovers in his debt." His conducting interpretations were similarly praised - "among the finest we have ever heard" is an unattributed quote printed in the sleevenotes. Turning to perhaps a more authoritative contemporary source, the recording was double-starred in The Record Guide and is accompanied by the note "Dean Eckertsen conducts a carefully prepared and sensitive performance, which is very cleanly recorded."

"Cleanly recorded" - and now cleanly restored by the sensitive work of Peter Harrison at disk2disc, we are delighted to return these wonderful recordings to the catalogue. They are released here as two MP3 files to make a double-CD, each one a high quality LAME-encoded file for maximum fidelity. The first file contains Concerti Grossi Nos 1-6, the second Nos 7-12.

Note that for the purposes of this release we have kept with the original records in marking individual Concerti, but not the individual movements, which are often differently named where marked elsewhere for issue, are usually of the nature "Allegro - Largo - Allegro", and which I would have struggled to fit into the confines of a CD insert! 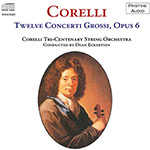 Always excepting the deservedly ubiquitous Vivaldi "Four Seasons", the crown of Italian baroque music are the 12 Concerti Grossi, Op. 6 of Arcangelo Corelli. Though not as theatrical and virtuoistic as Geminiani nor Locatelli nor as broadly melodic as Albinoni nor Benedetto Marcello, Corelli has a purity, an austere grandeur and a never-ending invention that banishes any hint of the routine.

I listened through all 12 concerti without boredom and with increasing wonder at both Corelli's genius and at Peter Harrison's incredible transmutation of VOX's dullish 1953 disks into bright, thrusting, noiseless things of beauty.

But there was a major question hanging over the proceedings. How could Dean Eckertsen and his group in 1953 compete with the original instrument and performance practice chamber orchestras of 30 years later? To determine that, I compared Concerto #7 using Eckertsen and La Petite Bande conducted by Sigiswalde Kiujken (EMI). La Petite Bande was recorded 24 years later than the Eckertsen and is in rather orthodox original instrument style. It had some pluses: (1) you could hear a continuo most of the time and (2) you could distinguish the ripieno (small band) from the tutti (full band). But mostly, there were minuses: fussy phrasing and broken-up lines.

The Eckertsen triumphed over it in warmth and heart! It wasn't even close. The Eckertsen in no way lacks for crispness or virtuosity, but it has a certain depth and matching enhanced sonic that will always draw me back.