Recorded in 1956 under the personal supervision of Carl Orff
Total duration: 57:11

Sawallisch brilliant - under the personal supervision of Orff

Regular readers of our weekly newsletter will know that Pristine recently took delivery of a large collection of classical vinyl discs, and over the last few weeks I've been sifting through them, pulling out interesting recordings and then checking for references to them on the Internet.

The Orff caught my eye thanks to the inclusion on the front cover, in bold capitals, of the line 'RECORDED UNDER THE SUPERVISION OF CARL ORFF'. Searching for references to this I ended up at a site which claims to be “the definitive web site” for this particular piece of music, and indeed, there's a reference to the Sawallisch recording right there.

More than that though, it reads (to me at least) as something of a challenge:

“There is a historical recording from the mid 1950's made in Orff's presence in which everybody puts in a lot of effort which is loudly applauded by Carl Orff himself on the last track but the quality of the recording means that we can't really evaluate it against later recordings.”

To be honest, having read that I thought I'd be in for something of a challenge, technically speaking, but no, this was a respectable recording for 1956; given that there is no applause present, at least on the British release (the site refers to a Capitol issue, which I assume is the US release though the site itself is based in Australia).

Anyway, having cleaned and transferred the LP I thought I might as well continue and see what a touch of XR remastering would do for it – generally the disc was in excellent condition, with only the odd click here and there needing my direct attention.

In fact the initial XR remastering was so successful that I decided to carry on with the recording and prepare it for full release. It is already available on CD elsewhere, and I have no idea whether the current issue is any improvement over the LP, but I'm more than pleased enough with how my own work has brought the very best out of this perhaps definitive (supervised by Carl Orff, remember!) performance, with frequency extension both at the bottom and top end of the range. Furthermore, where previously it was a little harsh and forward in the upper mid-range, there is now a much fuller and more convincing overall tonal balance.

Overall an excellent recording of this major work, with the Ambient Stereo version to be particularly recommended. 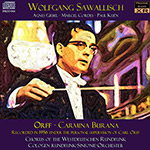 You’ll want this because it has the blessing of the composer.

Who would have thought that Carmina Burana would have become the public success that it has become? Is it the simplicity of the language, the fact that it makes an easy impact, that it’s modern music for the man in the street, or is it simply the splendid gaudiness of it all? I think that it’s a bit of all of them.

I don’t think that I’ve heard the complete work for some twenty five years so I welcomed this chance to re-acquaint myself with the piece. It’s still very entertaining, contrasting big choruses - the famous O Fortuna, which opens and closes the work - with the delightful dance number for female voices Chramer, gip die varwe mir (Merchant, give me the colour to redden my cheeks), the magnificently bibulous scene In the Tavern with the beauty of The Court of Love. It must be said that it’s a very clever concoction, but clever is the word. No matter how I look at the piece I find little of substance but lots of very attractive and engaging pieces.

Carmina Burana has reached a very wide audience so whatever I think of the qualities of the work are of no consequence. This recording was made under the supervision of the composer himself, so we must assume that this is how Orff wanted the work to be heard. It is certainly a very fine performance, soloists, chorus and orchestra are all attentive to the music, and Sawallisch’s direction is tight and to the point. However, overall, the performance lacks impetus, it’s far too earthy and it is too short on unbridled excitement. But you’ll want this because it has the blessing of the composer. The sound is boxy and the lack of reverberation, and feel of the hall in which it was recorded, make the sound somewhat bland. Despite all this, if you’re a fan, it should be on your shelf.

If you’re after sonic thrills in this work - and it’s full of them - I have always loved Frühbeck de Burgos’s fabulously free-wheeling version on EMI Classics (with Lucia Popp, Gerhard Unger, John Noble, and Raymond Wolansky, with the Wandsworth School Boys’ Choir and the New Philharmonia Chorus and Orchestra - only currently available as a download). This is one of EMI’s very best recordings of anything, and it’s a great, unbuttoned, performance. But it must be said that this Sawallisch recording will give lots of pleasure.