Skip to content
Home / Choir of the Monks of the Benedictine Abbey of St. Martin / BEURON ABBEY MONKS Christmas at Beuron Abbey (1957/59) - PACO066 Four Christmas liturgy recordings collected together for the first time

This release, bringing together for the first time the three major strands of Christmas liturgy recorded in the late 1950s by the monks of St. Martin's Archabbey, Beuron, is marred only by the switch from mono to stereo between the first recording, of the Second Vespers and Compline, and the two later recordings of the First and Third Mass. In all cases the recordings themselves are exemplary, capturing clearly the diction throughout whilst retaining the fabulous acoustics of Beuron Abbey to create a real sense of atmosphere and space.

I have used Ambient Stereo processing to help to recreate the space missing from the mono recording, spreading the reverberation of Beuron Abbey across the stereo soundstage whilst retaining the mono image of the singers. I've also been able to "help" a few rough edits in the original tapes, and noted that the half-track stereo tapes produced considerably higher hiss than their earlier, full-track mono counterparts, something that has been largely remedied by digital noise reduction.

Overall, however, I'm pleased to report that the high quality of the original source recording left me with little more to do.


Choir of the Monks of the Benedictine Abbey of St. Martin, Beuron
Dr. Maurus Pfaff direction 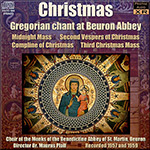 The origins of the festival marking the Nativity of the Lord are not to be found in Old Testament tradition; their impulse springs rather from Hellenistic culture. Both the Greeks and the Romans celebrated the birthdays of monarchs and other important men. The day chosen was not always the actual anniversary of birth, even if that was known, but was often a day of some other significance in connection with the personage being remembered. It was therefore natural for the early Christians to celebrate the birthday of their master; and as the real date of the Lord's birth is unknown, a day of symbolic significance had to be chosen.

During the third century a late cult of sun-worship flourished, above all in Rome. It was declared by the Roman emperor to be the state religion, and at the same time was associated with the Roman cult of the emperor. The emperor Aurelian (270-75) introduced the festival "Sol Invictus" in Rome following his victory over Palmyra in the year 274, choosing 25 December as the dies natalis Solis Invicti. This was the last great cult of Roman paganism, and it brought about the last stage in the struggle between Christianity and Roman sun-worship. One consequence of it was the existence and the liturgical form of the Christian Feast of the Nativity on 25 December. It is clear from all extant fourth-century texts that the festival of Christ's birth, celebrated on that date, was a direct answer to the festival of the pagan cult of sun-worship.

The Christmas Liturgy has been distinguished since the sixth century by three celebrations of the Mass. The third of these Masses is the oldest. The historical origin of the first Mass of Christmas may well be found in the Church of Jerusalem, where the festival of the Lord's Birth was celebrated at night in the Church of the Nativity at Bethlehem. This practice, reminiscent of the Statio ad Sanctum Mariam maiorem ad Praesepe, was copied at Rome.

The liturgical celebration of Christmas contains both a First Vespers on Christmas Eve [available as PACO 014, from a 1952 Beuron Abbey recording], and a Second Vespers next day, bringing the Feast to a conclusion. The former refers to "Him who is to come", the latter to the fulfillment of this hope in the Birth of the Saviour. Vespers itself, the evening prayer of the Church, is of very ancient origin, with its beginnings in fact traceable to the Old Law (Ps. 140, 2).

Compline (Completa, Completorium) is the last of the Day Hours. It is of monastic origin, and was already known to Basil the Great around 360 A. D. In the West, the earliest evidence we have of it dates from the 5th century. Southern Gaul was acquainted with it in the 6th century, and the Rule of St. Benedict from the same period regards it as generally known. Since the time of Charlemagne it has been obligatory for the secular clergy as well. Monastic Compline is simpler than the Roman form, the latter being more closely related to the office of the day. Like the monastic it consists of two main parts: an Introduction, comparable to the "chapter" section of Prime, and the remainder which is properly a choral office

Recently (Fanfare 35:1) this label gave us the first CD issue of a noteworthy recording of Gregorian chant made by Archiv Production at Beuron. While it was a notable traversal of the Easter vigil rites (completed with an earlier disc of the Mass of Easter Sunday), I should not have called it a complete recording, for it was more notable for showing how the ritual chants were performed than for including every choral chant. Only two of the four tracts (often called cantica) of the vigil were included, an unfortunate omission, since the other two had never been recorded up to that time. The second collection on this label comprises the last three LPs that Archiv made at Beuron, stereo recordings of the first and third Masses of Christmas and a mono recording of Second Vespers and Compline made during the same sessions as the Easter vigil. Vespers fills out the first CD here, while Compline leads off the second CD. Archiv had already made the two Masses available on CD, an early entry being the Third Mass (427 014-2). Later, the First Mass was issued (445 046-2), filled out for full value with excerpts from the earlier disc, and this is still available.

As we heard in the previous issue, Pristine does a superb job of making transfers from vinyl pressings that sound as clean as the original tapes might do. The earlier mono LP was never reissued, but both Masses had already been reissued on LP more than once, so later pressings of these were used that must have been at least as good and probably better than the original issues. The mono recording was enhanced by processing that filled in the sound while retaining the mono image of the choir, a technique that was also used for the Easter set. The printed insert is a single page carrying an excerpt from the original note by Pfaff and a note about the new transfer. The label supplies fuller notes and texts of its entire catalog only on its website. Both Masses are more complete than most such recordings, for the choral chants are completed by the cantillations of the celebrant and other ministers, a fact that is not evident from the list of contents of the First Mass.

As we noted earlier, the monks of Beuron won renown for the Archiv label by their performances of Gregorian chant, which were regarded by many critics as preferable to the standard established at Solesmes. Since their interpretations, based on Dom Mocquereau’s principles, were similar, one can only guess that the German accents were a fresh sound after so many French accents from Solesmes and other monasteries. If Pristine is willing to delve deeper into the Beuron drawer, some interesting discs remain. One is a treasurable Good Friday program (APM 14034) with the complete Improperia, otherwise recorded down to this day only in an elaborate Dutch set of surpassing rarity. Another is an excellent version of the Laudes Regiae (Christus vincit), issued only in Germany at 45 rpm (EPA 37111). Finally, a superb Palm Sunday procession was only issued in Germany on a 10-inch LP (AP 13041). Additional chants, more widely duplicated, could fill out the two-disc set.

It always seemed odd that Archiv gave up on Beuron after 1959; they went to the nuns of Varensell to make two LPs in 1960 and 1962, then nothing more for many years. Meanwhile, Decca did not stop in 1958 at Solesmes (the last date I mentioned in the earlier review), but continued recording almost every year, continuing even after Dom Gajard died (to be succeeded by Dom Jean Claire) until the French branch of Decca went out of business in 1978 or 1979. But very few of these later LPs were ever issued here on London, and not even one of the parallel series made by the nuns of Argentan from 1963 to 1976. This new set will be interesting if you do not already have the Archiv reissues.