Skip to content
Home / Choir of the Monks of the Benedictine Abbey of St. Martin Beuron / BEURON ABBEY MONKS The Easter Liturgy (1953/57) - PACO056 The recordings presented here originally spanned three LPs, each one of which presented a complete service spread across its two sides. The editions used were published in Tornaci Nerviorum (Tournay, Belgium) in 1957 (parts 1 and 2) and 1908 (part 3). The transfers, from near-mint Archiv Produktion LPs, presented no difficulties, and I have retained the original equalisation in this remastering, concentrating instead on reducing light tape hiss and inevitable turntable rumble.

This is a release where the effect of Ambient Stereo processing is highly recommended: the choir of 30 monks plus Father Pfaff retain their central mono image within a stereo reverberant ambient space drawn from the recordings themselves, giving a real sense of space and air around the singers. 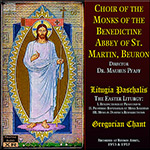 "These two discs contain the major part of the Liturgy of Holy Saturday according to the reformed rites put into force by the general decree of the Congregation of Sacred Rites, Maxima Redemplionis Wostrae Mysleria (November 16th, 1955). The texts, as most readers likely to be interested in this recording will know, are to be found in the Holy Week Manual (Burns & Oates), but three hymns and a psalm with antiphon are sung by the Beuron monks choir that have no place in the Roman rite and are, presumably, peculiar to Benedictine congregations.

APM14104 has on it The Blessing of the New Fire (preceded by the hymn Inventor rutili), The Blessing of the Paschal Candle, The Solemn Procession, with the lighting of all the candles carried by those taking part in the ceremony, the singing by the deacon of the wonderful Easter Song— the Exultet—probab]y composed by St. Ambrose, bishop of Milan, in the fourth century, and another hymn, 0 res digna, Readings from the,Old Testament (formerly twelve, but now reduced to four: only one is included here, together with the Canticle —before called a Tract—following), The First Part of the Litanies, and the Blessing of the Baptismal Water.

APM 14105 has on it The Procession to the Font, with the beautiful canticle Sicut cervus desiderat, The Renewal of the Baptismal Promises, The Second Part of the Litanies, leading to The Mass of the Easter Vigil, begun at midnight (Kyrie eleison, Gloria— during which the bells of the monastery are rung—and Sanctus, and the various parts of the Proper). It should be noted that after the Epistle the choir alone sing the three-fold Alleluia—raised successively in pitch—and not, as in the Roman rite, the celebrant followed by the choir. After the Sanctus a bell is rung during the Elevation and the Mass proceeds from the doxology Per quem have omnia to Fax Domini, which is followed by an antiphon, Cito eunles dicile, and Psalm 117 and then by Lauds. After lie missa est the Easter processional hymn Salve festa dies is sung accompanied by a joyful peal of bells.

These discs include speech, intoning, and singing, all carried out extremely well and recorded with a good acoustic. D.G.G. are to be congratulated on their enterprise, which one hopes will be rewarded, in issuing so valuable an addition to the recorded repertory of Gregorian chant."

"This disc contains the whole of the Proper and Ordinary chants for Easter Sunday (the setting of the Ordinary is, of course, No. i (Lux et origo) in the Kyriale, with Credo No. r, information which, for sake of completeness, the card might have noted), the Epistle, Collect, Gospel, Preface, Paternoster, Postcommunion, and lie missa est. As in the Archive record of the Mass for All Souls (APM14002) the Monastery bells are rung after the Sanctus.

The acoustics and singing are again excellent, and this time the chief cantor does not anywhere go off pitch, though he shows some sign of strain in the versicle of the Gradual, Haec dies. This fine Gradual is, in fact, better sung on the DeccaSolesmes disc (LXT27o6), in which two cantors (at least) undertake it. As I noted before, the singing of the Beuron monks, virile in tone and prayerful in spirit, tends to be rather rigid and lacking in nuance as compared with that of the Solesmes monks, who have a more sensitive feeling for the contours of the phrases and a better "attack ". But one is very grateful for this complete presentation of the joyful Easter Sunday Mass to add to the growing collection of LP discs of Gregorian chant."

This is a valuable reissue of a unique program

This was a set of three LPs that presented the entire Easter vigil and Easter Sunday Mass in chant. The latter part was on the third disc, recorded singly four years earlier and issued as the first number in the Archive Production series distributed by Decca (U.S.). Such a complete traversal of the Easter vigil on the first two discs has never been duplicated, for Jan Boogaarts’s Holy Week set replaced many of the chants with Renaissance polyphony. It seemed as if it would never be reissued, for this vigil liturgy, first celebrated in 1951 experimentally and 1956 worldwide, was replaced in 1970 by a second drastic revision of the rites. (The text of the Exsultet sung here differs from both earlier and later versions.) The third disc, while it was the most complete Easter Sunday Mass ever recorded (every bit of sung prayer was included), has been more or less duplicated many times since. Pristine’s notes state that each of the three LPs contained a complete liturgy, but this is to misunderstand the captions on the original discs. The first two discs were called Liturgia Paschalis and Missa Solemnis, but they really comprised a continuous liturgical celebration, proceeding without pause from the blessing of the baptismal water at the end of the first disc to the procession to the font at the beginning of the second.

While the monks of Beuron were part of the Solesmes monastic congregation and their chant interpretation followed the Solesmes method, it had a distinctive Germanic sound and accent. While Decca (U.K.) recorded the monks of Solesmes in 1952, 1953, 1955, and 1958, the Archiv recordings at Beuron from 1952 to 1959 attracted wide acclaim, not only for their fresh sound but for the complete liturgical celebrations that marked every issue. As transferred here from published pressings, it sounds as good as ever. Notes and texts are available only online. This is a valuable reissue of a unique program.