The Vespers of Christmas Eve

This is our second 1950's recording from the monks of Beuron Abbey (see also Reqieum Mass, PACO006) and once again, the ages-old Gregorian chant has been wonderfully captured.

The German Abbey of Beuron lies on the south-west bank of Lake Laach, near Andernach in the Rhineland. The abbey was originally founded in 1093 and on the basis of this recording, must have had quite a thriving community in 1954.

The choir sounds quite substantial and makes a lovely, homogenous noise. Recordings of monastic communities from this period have the advantage of combining the technological advances in recordings, the technical facility of the monks themselves and their continued familiarity with the daily round of the Latin Tridentine mass. This latter would, of course, be disturbed as a result of the 2nd Vatican Council.

Here the choir sounds wonderfully confident and natural, as if they have been doing it all their lives. The acoustic is well captured so that though the choral sound is focused and the choir’s diction well captured, the resonance of the church itself is not neglected. The result is very atmospheric... 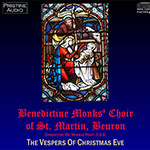