In this remarkable recording, we get to hear music shaped by many centuries of tradition, presented as living art. The origins of the Litugical Office for the dead in the latin Church date back to the second century AD and an annual commemoration of the deceased. The earliest records of the texts - as still used today - date from the 10th century, and it would appear that aspects of the music, particularly the Kyrie, have remained more or less constant since around the year 500.

Later aspects of this music, such as the Dies irae, date from around 1200, with a melody dated to around 1300. Clearly, then, this is music that has evolved throughout the history of the Christian Church, and this recording of the Monks of the Abbey of St. Martin, Beuron, Germany, is a testament to that long history, as well as to the scholarly research work of their conductor, Father Maurus Pfaff. 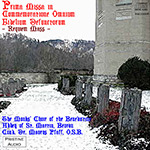 I come in musicological sackcloth and ashes to this recording as I am signally unfamiliar with Gregorian Chant except that it is the fountainhead for Western Civilization's music. I have heard it occasionally, but I have never much listened. It is plainchant, no accompaniment, no harmony, performed by a single voice or many voices. The rhythm is very free and there is much room for pitch improvisation. The words are entirely in Latin and follow mostly the normal Mass, except the Gloria and Credo are omitted from a Requiem, being considered a little too joyful.

I began listening out of duty and within five minutes was pretty well gripped by the beauty of the performance and the sound. The Mass begins with a Requiem Aeternam in mood like Faure with alternating solo and choral phrases. Then, a darker Kyrie-Christe-Kyrie Eleison sequence, again alternating solo and chorus, is heard. A beautiful, virile voice begins a lengthy plainchant on a single note with melismas (musical curlicues) on each word, always ending softly, and I am hooked! This is again interspersed with choral plainchants almost in the manner of a concerto grosso.

Then, to my surprise, I hear a familiar melody and the spell is somewhat broken. I hear the plainchant Dies Irae (Days of Wrath), used by Berlioz in his Requiem and in the 5th movement of the Symphonie Fantastique, used by Liszt in the Totentanz as the subject of variations, used by Rachmaninoff in the Paganini Rhapsody and the Symphonic Dances and used by Respighi to depict his poisonous vipers in Brazilian Impressions.

But here the theme is in its pure state and it breaks my otherworldly mood somewhat. The work goes on considerably longer and peace returns. I am so impressed with the strength and the differences in the solo voices of the monks. The sound lets one hear the purity of the singing and the spiritual space of the cathedral. But what is more telling for me is the realization is that as the musical means become more limited, the musical results can become so much more powerful