For many, Kempe's is the greatest Meistersinger recording ever

I regularly receive e-mails and calls with suggestions of recordings deemed necessary of a Pristine Audio XR and Ambient Stereo makeover. Occasionally these are accompanied with a CD-R transfer of the recording in question. In this case, the collector, Dr. John Philips (to whom we are extremely grateful) arrived in person, bearing an armful of LPs for my consideration and a huge amount of enthusiasm and knowledge.

Above all he was insistent that I at least consider strongly the present recording of Die Meistersinger von Nürnberg, in his opinion not only the best recording ever made of it, but also in its US Angel pressing, the very best vinyl LP versions to be had. I was astonished to discover that, despite a reissue by EMI on CD some years ago, this masterpiece of the recording studio was now out of print and difficult to obtain. But I was still somewhat concerned that the LP transfers might not live up to the quality of the EMI CD transfers.

I need not have worried. Towards the end of the LP transfer and remastering process I finally managed to track down a copy of the CD issue for comparison. Despite this being a very good 1950s recording, the XR remastering had found a greater depth and clarity in the recording than was ever to be heard from the CDs. The LPs were so clean and clear to begin with that, after applying the same XR processing to a section of the CD issue that had been applied to the LP transfers, the two were entirely indistinguishable by even the closest listening tests.

This is certainly a recording where I would recommend the Ambient Stereo issue. As with all our Ambient Stereo releases, the central mono sound remains perfectly intact - this isn't the "fake stereo" of years gone by. What you do hear though is a real sense of the space around the singers and orchestra. In the original recording one can detect what is a rather primitive use of studio reverberation at times - by allow this some spread and using advanced digital signal processing it has been possible to enhance and significantly reduce the artificiality of the effect.

The end result is a supremely listenable, crystal clear sound, with real depth in the bass, fabulous transparency in the treble - all in all a most worthwhile improvement on the now unobtainable EMI CD set of this superlative recording. 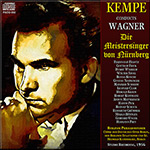 Devotees of Die Meistersinger are most likely familiar with Rudolf Kempe’s lovable, distinguished 1956 performance, his second complete recording of the opera, recorded in rich mono by EMI with the Berlin Philharmonic and an expert cast. The opera has fared very well on recordings with strong studio accounts by Karajan, Knappertsbusch, Kubelík, Sawallisch, and Solti (his second) and important live versions by Toscanini, Abendroth, Reiner, Karajan (his first), Levine, and others. For many collectors, Kempe II is near or at the top of the list. After revisiting the performance on Pristine Audio with sound that gives a sense of greater space around the singers, I would rank it just a notch below Kubelík’s as the best overall Meistersinger.

To restate what many have already noted, Kempe’s masterly conducting is its outstanding feature. He allows all of the work’s many facets—humor, pathos, and delicacy along with its monumentality—to emerge with natural momentum. There’s a wonderfully warm sound to the strings of the Berlin Philharmonic and, unlike many conductors, Kempe maintains an atmosphere of pomp without pomposity from the start of the overture. He brings great clarity and perfect pacing to the difficult contrapuntal finales of acts 1 and 2, helped by the combined forces of three well-trained choruses.

Then there’s the pleasure of hearing an all-German cast of singers who were closely identified with their roles interacting as a real ensemble. There’s not one word in the whole performance that isn’t clearly enunciated. In the important secondary roles, Gerhard Unger is ideal as David, and Marga Höffgen, Gottlob Frick, and Gustav Neidlinger are stylish, comfortable, and have exactly the right voices for Magdalene, Pogner, and Kothner. The young Hermann Prey as the most lyrical of Night Watchmen is a special joy. Benno Kusche is just right as Beckmesser, funny but not overplayed. The role of Eva is particularly well represented on Meistersinger recordings. Schwarzkopf, Janowitz, Donath, and Studer are all wonderful in the part. Elisabeth Grümmer, that paragon of German sopranos, is their equal.

But it’s with Walter von Stolzing and Hans Sachs that we spend the most time (hours and hours), and it’s with the performances of Rudolf Schock and Ferdinand Frantz in these huge, difficult roles that I have some slight reservations. Frantz is a dark-voiced Sachs, authoritative and musicianly, but a little gruff and somewhat unvaried in timbre. This isn’t to say that he isn’t touching in his quieter monologues.

Several far-from-prizeworthy Walthers (Hopf, Beirer, Treptow) are the weak links in the casts of other recordings. Rudolf Schock is preferable to them, and his Walther is phrased and sung with beauty and insight, but the voice is slightly dry, and there’s occasionally a sense of strain.

Turning to the Kubelík recording, Sandor Konya, an important Wagnerian tenor who is poorly represented on commercial recordings, provides a more mellifluous Walther than Schock, and Thomas Stewart is a nobler, more vocally resplendent Sachs than Frantz, more poet than cobbler.

Nonetheless, Kempe’s Meistersinger has well stood the test of time and is now heard to best advantage on Pristine Audio. I wouldn’t want to be without it.