The Budapests: one of the greatest 20th century quartets

The first of these two recordings arrived amongst a group of LPs from our Belgian friend Jean-François Lambert on a 10-inch Philips LP from the mid-50s. Assuming this was therefore a recording from that era, I got to work on the transfer and restoration of the recording.

Initially I was somewhat put off by the sound quality, which seemed a little poor for a major quartet of this era, but thanks to some brand new restoration software i've recently been testing, this was largely overcome and I began to feel we had something worthwhile and nearly ready for release.

With this in mind, I was delighted to receive a transfer from Dr. John Duffy, intended initially for our Pristine Exclusives catalogue, of both the Ravel and Debussy quartets, from which I was able to use the Debussy to compliment my own Ravel transfer. Dr. Duffy, too, had worked from an LP source, this time a US Columbia issue, and had dated its release to 1950. Given the quality both he and I had achieved (I was able to squeeze a little more top end out of the Debussy with some nifty XR remastering) I was content that these were pretty good recordings for a 1950 release date.

I was therefore utterly astonished when I came across the Budapest Quartet discography at Youngrok Lee's superb music pages (which contain some of the best-researched discographies to be found online) and discovered that both of these recordings were made way back in New York in 1940! The frequency response and low noise levels gave no indication whatsoever of this vintage, and as a result I now up my technical quality rating for this release from good to amazing!

The vintage - predating any claims for full-frequency response recordings by several years - does explain one or two rougher edges at times, but overall any lover both of this music and this quartet are in for a real treat with this splendid issue. 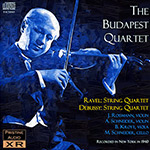