Dohnányi as composer, conductor and pianist

A fascinating, often brilliant set of recordings in transfers by Mark Obert-Thorn

The present program brings together examples of Ernö Dohnányi’s abilities as pianist, conductor and composer. Most of the recordings were made during a three-day period in June, 1928 when Dohnányi was on tour in London with the Budapest Philharmonic Orchestra, of which he had been music director since 1919.

The first two recording sessions were done for Columbia in one of their smaller London studios, possibly the Portman Rooms. The day after these sessions ended, Dohnányi and the orchestra moved to the more expansive acoustic of Queen’s Hall for an HMV session. It is interesting to compare the Columbia version of the Berlioz march, with its unforgiving dead studio acoustic to the HMV version, even with the latter’s handicap of having been released from a dubbed matrix. (HMV recorded three other sides at this time, all of Hungarian nationalist hymns, one of them being a 10-inch version of the same Dohnányi Hiszekegy presented here.)

Three years later, Dohnányi returned to London to record his Variations. Even though the sessions were held in a large venue (Kingsway Hall), the composer was again unlucky in that the matrices were over-recorded and distort during loud passages. He was to remake this recording in stereo in 1956, but this earlier version has its charms, not least in the humor which HMV producer/conductor Lawrance Collingwood finds in the orchestral accompaniment.

Cover artwork based on a photograph of Ernö Dohnányi 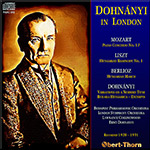 One of the last century’s great composer-pianists playing and conducting his own works, plus the earliest recording of a Mozart piano concerto: It doesn’t get more “historic” than this

Like his slightly older contemporary Rachmaninoff, Ernő Dohnányi (1877–1960) was a triple threat: He made a big splash as a composer while still in his teens, impressing no less an authority than Brahms with his C-Minor Piano Quintet, op. 1; he was a virtuoso pianist; and he was a highly regarded conductor, directing the Budapest Philharmonic for many years. This well-filled CD documents his activity in all three of these roles.

The bulk of the material reissued here was recorded in a three-day period in London in June 1928; the two items with the London Symphony were recorded three years later. Remarkably, this 1928 version of the G-Major Concerto, K 453, appears to be the first-ever recording of any Mozart piano concerto. Conducting from the keyboard (as Edwin Fischer and Bruno Walter would also do in prewar Mozart concerto recordings), Dohnányi gives a stylish and tasteful performance, if one of somewhat less than crystalline technical perfection. He plays his own rather anachronistic cadenzas, sounding especially in the first movement as though he is actually improvising. The piano comes through clearly, but the orchestra seems rather anemic and suffers from boxy recorded sound; as producer Mark Obert-Thorn explains in his note, the 1928 Columbia sessions were held in a small studio, while the Molto vivace from Ruralia Hungarica, the two patriotic hymns, and the second version of the Berlioz (taken down only two days after the first!) were recorded by HMV in the more spacious Queen’s Hall, with more satisfactory results.

The 1931 items (the Nursery Variations and the Presto ma non tanto from Ruralia) sound more natural in Obert-Thorn’s typically excellent transfers; the London Symphony is also considerably more polished than Dohnányi’s Budapest Philharmonic. In the Variations, Dohnányi the pianist plays with a wonderfully light touch, his phrasing of the familiar theme (“Ah, vous dirai-je, Maman,” or, to English-speakers, “Twinkle, Twinkle, Little Star”) conveying its innocence at the outset (following the laughably overblown introduction), and then, at the end, the considerable sophistication it has gained through its various adventures.

One of the last century’s great composer-pianists playing and conducting his own works, plus the earliest recording of a Mozart piano concerto: It doesn’t get more “historic” than this. Self-recommending.