The introduction of electrical technology in 1925 enabled recording to move outside the confines of the studio, and HMV and its associated companies were quick to take the microphone into the opera house. Starting with recordings made at Covent Garden and La Scala in 1926, excerpts of live operatic performances began to be issued commercially on disc.

During the 1927-28 concert season, recordings were made at the Berlin State Opera during public performances of three works: La Bohème, Der Rosenkavalier and Die Meistersinger. For the last of the three, two performances were recorded. Fourteen sides were taken down on April 29th, 1928, while another 32 sides (many of them duplicating the earlier recorded portions) were waxed on May 22nd at the performance given in honor of Wagner’s 115th birthday. From these, the 20 sides of the issued set were chosen.

There was no thought at the time of recording the work complete. (When that was finally done, at the 1951 Bayreuth Festival, the result took a formidable 68 sides.) In selecting which excerpts to release, the focus seemed to be on portions which were not already available – or likely to be available – as single disc releases. Thus, we have no Preludes, nor either of Sachs’ monologues. Instead, we have David explaining the song rules to Walther and Pogner discussing his doubts with Eva, as well as scenes which work better in the unedited long-form of an actual performance, like the extended Schusterlied scene from Act 2. We do have the finale, which the same performers had already recorded in the studio the previous year; but one couldn’t imagine ending the set without it. The overriding raison d’être for the recording, however, was the preservation of Friedrich Schorr’s portrayal of Sachs, which was already considered in a class by itself.

A controversy has arisen recently regarding the identity of conductor. The labels of the original discs give no performer credits at all. The 1936 Gramophone Shop Encyclopedia identified the singers, but it was only with the first volume of WERM in 1951 that Blech is credited as conductor. Someone claiming to have the playbill of the May 22nd performance has said it lists Erich Kleiber for “Musikalische Leitung.” The wording choice seems ambiguous; one would think he would be listed as “Dirigent” if he in fact conducted the performance. Kleiber was co-Music Director of the BSOO with Blech at the time; could that title have been a reference to this position? In any event, Alan Kelly’s research into the HMV logs shows Blech listed as “Dirigent” for both performances.

In the issued set, all the sides save the opening of Act 2 (Track 3) came from the May performance. From the earlier date, two further sides have been discovered and are published here for the first time. They show differences in microphone placement (the asides between Walther and Eva during the Schusterlied are more audible here) as well as featuring a different Beckmesser and Walther, along with some unwelcome stage noises. A check of the EMI vaults has shown these to be the only extant unpublished sides from either performance. (Due to CD timing limitations, the second unpublished side had to be faded out about a half-minute before its conclusion here. However, it is available complete as a download on the Pristine Audio website page devoted to this release.) 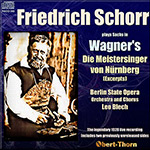 What makes Friedrich Schorr’s Sachs special, at least to me, is the mellow, unforced authority he projects. He’s still the king of the cobblers.

When I first read about this collection of live excerpts from Die Meistersinger some years ago, I was appalled that anyone could be so stupid as to record excerpts from the opera back in 1928 and not bother to preserve Frederick Schorr’s performances of the Fliedermonolog and “Wahn! Wahn!” but it turns out that there was actually some method to this madness. As the producer/annotator, Mark Obert-Thorn, points out, the idea was to fill in some gaps by recording passages that had not been recorded earlier and were unlikely to be in the near future. Some 46 sides of 78- rpm recordings were taken down from two performances, some of them duplicating the earlier ones. Ultimately, 20 sides were issued. This CD includes most of two unpublished sides from the April performance. Why was there some hesitation about recording the complete opera on 78s? The producer points out that, when this was finally done in 1951, the opera consumed 68 sides—I assume that most people bought the LP set instead!

I found it both fascinating and frustrating to eavesdrop on a 1928 stage performance—“frustrating” because I start contemplating all the things that might have been recorded back then. I have heard studio recordings from the ’20s that sounded worse than this; once you become absorbed by the performance, the surface noise, such as it is, virtually disappears. What makes Friedrich Schorr’s Sachs special, at least to me, is the mellow, unforced authority he projects—he sounds wise and humane and his interaction with the other singers is conversational, even though he’s singing. I have admired performances/recordings with Theo Adam, Ferdinand Frantz, Paul Schoeffler, Thomas Stewart, Giorgio Tozzi, and José van Dam, but I think he’s still the king of the cobblers. Although a powerful motive for this project was the preservation of Schorr’s authoritative Hans Sachs, I heard enough of Leo Blech’s conducting to make me wish that more of his contribution had been preserved. After all, if you want a “complete” (it’s not uncut) Meistersinger with Schorr sounding very nearly as good in 1940 as he did back in 1928, there’s a Met broadcast conducted by Erich Leinsdorf in very respectable sound with Charles Kullman as a splendid Walther and a decent supporting cast. It’s been issued by Immortal Performances. My review appears in Fanfare 33:1.

Opening the disc is part of David’s lecture to Walther. Karl Jöken may not have a particularly strong voice but listen to how vividly he makes his points and executes the ornamentation with the help of Blech’s sympathetic, supple support. The scene even takes on a playful, humorous quality. The next excerpt, “Das schöne Fest, Johannestag,” unfortunately, features Emanuel List’s labored, congested vocalism as Pogner. This and his undistinguished contribution to the scene with Eva near the beginning of act II suggest that the Golden Age of Wagner performance wasn’t necessarily pure gold. Among the selections on the disc is a nearly 20-minute chunk of the “Jerum! Jerum!” scene where Sachs sabotages Beckmesser’s serenade to Eva. A smaller selection from it is preserved on one of the two unissued sides with the mike apparently placed closer to Eva and Walther (Fritz Wolff on this night), since their brief interjections come across more clearly. From act III, we get the opening scene between David and Sachs; next, the scene where Eva pretends one of her shoes doesn’t fit, followed by Walther’s Prize Song and Sachs’s admonition that he’s too old for Eva, and the allusion to Tristan and Isolde. The recording cuts out just before Sachs “baptizes” David. Elfriede Marherr-Wagner and Robert Hutt strike me as solid performers, the kind that even major opera houses need, rather than star singers; I doubt that either was the best or worst thing in any performance in which they participated, and that was surely the case back on a certain night in May 1928. Next, we hear part of the artisans’ entrance (as is sometimes the case, the onstage trumpets aren’t exactly precise), the beginning of the Dance of the Apprentices, the tail end of the Procession of the Mastersingers, most of “Wach auf!” and the closing scene, even though Schorr had made a previous studio recording of it. The other unpublished side, which concludes the CD, preserves the April 29 Eva/Sachs scene from act III but cuts out before the Prize Song. It seems that the CD just ran out of space (look at the total time) but Obert-Thorn writes that you can download the missing half-minute or so from Pristine Audio’s website. Throughout, Leo Blech (assuming it is he—there is some dispute about this) collaborates with the singers, offering a warm, sympathetic foundation for them. Too bad he never recorded the complete opera.