The present release restores to circulation Beecham’s only recordings of two Tchaikovsky masterworks: the Fifth Symphony and the tone poem, Francesca da Rimini. They were previously coupled on an EMI CD in 1992 as part of their “Beecham Edition” series. When many recordings from that series were reissued in box sets in 2011, these were omitted, and thus have not had an “official” reissue in nearly three decades. Filling out this release are two acoustically-recorded abridged movements from the Pathétique Symphony, the sole surviving evidence of Beecham’s approach to this work.

The Fifth Symphony has seemed to invite extremes of interpretive subjectivity among conductors, particularly in the prewar years. Prior to Beecham’s recording, there had been examples of this in the sets from Mengelberg, Stokowski, Stock, Kitschin and others. Whether it was his intent or not, Beecham’s version was initially greeted as something of an antidote to that trend by Gramophone in a 1940 review by W.R.A.:

In general, is it not true that the more obvious the drama (or melodrama, as it is with this composer) the less obvious should be any glosses, pullings out, pushings in or other conductorial demonstrations of (usually) misplaced affection – for either the composer or himself? Hence Beecham’s straightforward paces, his steadiness, solidity without much weight, and a general tone of simple sincerity. If that be judged the right tone for the work, how well are he and Tchaikovsky met!

Forty years later, Mortimer H. Frank, reviewing for Fanfare an LP set which reissued this symphony along with others Beecham recorded in the 1930s, came to a similar conclusion:

Both the Tchaikovsky and the Franck interpretations fascinate: free of the excesses that often infected performances of this repertory during the ‘30s, they also seem a bit dispassionate. Many listeners, however, may find their occasional understatement attractive.

Yet, the interpretive objectivity attributed by the reviewers does not translate into a dull performance. As he did with Francesca da Rimini, Beecham conjures up plenty of fire, along with a modicum of targeted string portamenti and, despite the critics’ conclusions, no little flexibility of tempi.

Beecham made commercial recordings of only four Tchaikovsky symphonies – the Second, Third, Fourth and Fifth. Of these, only the Fifth was programmed by him with any frequency (and not at all after the war). The Tchaikovsky symphony which actually saw the most Beecham performances was the Pathétique; yet, he never recorded it complete, nor have any live performances surfaced, to my knowledge.

The only surviving examples of his way with the work seem to be two abridged movements recorded acoustically in 1915. (A further four unidentified sides were recorded by Columbia three years later – perhaps the first and fourth movements truncated to two sides each – but never released and are presumed lost.) In them, we hear not only the vast advances made by technology over the two dozen years which separate them from the Fifth Symphony and Francesca, but also the relatively high standard of playing by two orchestras created and trained by Beecham.

The sources for the transfers were first edition American Columbia copies for the symphony and Francesca, supplemented by an Australian Columbia for the symphony, and a British pressing of the acoustic disc. The last two movements of the Fifth Symphony were played without pause on the original recording. 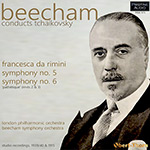