All but one of Beecham's early acoustic Mozart recordings was made for Columbia, and it was to the American company of the same name that he returned in the early 1950s to record a series of seven Mozart symphonies with another of his "own" orchestras, the Royal Philharmonic. The symphonies have been in and out of print since then, and their original, somewhat harsh sound quality to an extent masked their exquisite brilliance. Despite this, they have always been highly regarded, and it can only be hoped that these new transfers and XR remastering will further enhance their reputation.

But that's not to overlook his earliest Mozart recordings (a single side cut for Odeon in 1912 will appear on a later volume here), made with an orchestra that some rated as the finest he ever conducted. Again, XR remastering has helped bring these primitive horn-based sound recordings just a small step closer to the modern listener's appreciation - and very fine they are too.

The rare acoustic recordings were sourced from existing vinyl transfers, including a "private" box set from the 1970s, WHS 102/4. It is from notes enclosed here that the archive review for this release was derived - I could find no reviews when searching in the Gramophone and Fanfare archives of any of Beecham's 1950s Columbia symphony recordings. 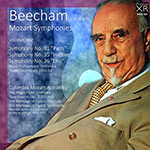 Here, then, is one of the great Mozarteans...

This CD represents Volume One of the Columbia Mozart symphonies Thomas Beecham recorded in the studio with the Royal Philharmonic between 1951 and 1954. It also contains the two overtures and several snippets captured acoustically with the Beecham Symphony Orchestra in 1915—all restored at Pristine with Andrew Rose’s customary wizardry.

Sir Thomas’ approach to Mozart lies well within memory of many Fanfare readers. Yet it reaches us now almost as a voice from an unrecoverable past. These are big, full-orchestra readings of Mozart, played with unashamed sentiment. Beecham seeks to ravish us in ways far beyond the clear-stream math of HIP revisionist thinking. Sixty or 70 years ago that was the norm: Romantic Mozart delivered to us by the likes of Bruno Walter, Otto Klemperer, and Wilhelm Furtwangler. There is a tendency to flatten perspective on this vanished world over time, to regard “big orchestra” Mozart as having been all of a piece in its day. But of course, it wasn’t.

Klemperer’s approach, for instance, conveyed a powerful solidity. Bruno Walter, also nearly Brahmsian in Mozart, was known for his “plastic phrasing.” And Furtwangler’s Mozart could easily convince you that Wagner was just around the corner. But Sir Thomas’s approach had a special quality of lightness and grace. He seemed to balance an orchestra from the top down. And it is no accident that Beecham was famous for bringing out the subtleties of French music. His sheer deftness stands out. The music just skates along here, light as a feather. It conveys an airy, almost ecstatic exhilaration you won’t find elsewhere. Indeed, I’d say Beecham’s approach represents Mozart conducted as though it were Mendelssohn. With all the pretty cadence ritards and delicate tempo adjustment, there is no heaviness. The timpani-led punchiness of current-day Mozart is completely missing.

Andrew Rose is to be congratulated once again for bringing extra life to the never stellar-sounding original LPs. He has managed to include so much out-of-phase rear channel material in his remastering that I mistook the performances for being in stereo at first. The result is extremely listenable. And his efforts with the acoustic items are similar. There is, amazingly, real air and back channel surround to be found in the horn recordings. The Magic Flute Overture comes through especially well. Despite limitations, one can sense that the Beecham Symphony Orchestra was very fine, indeed. The violin passage work is quite lovely, though the use of portamento, especially upward-swooping portamento, sounds a bit kitschy and “home sweet home-ish.” But you recognize the same subtle traits in early Beecham as later.

Here, then, is one of the great Mozarteans, brought to us at the beginning and near the end of his career. I, for one, am extremely appreciative. Windows on the past aren’t made from today’s tempered glass. They inherently distort, refract, and contain areas of opacity, just where you wish for clarity. But Andrew Rose has done all that is humanly possible to polish the surfaces. And his vision is now the effective catalyst to our own.