I came to transfer this recording almost by accident - I had taken delivery of a new stereo LP replay cartridge and, having fitted it to my tonearm, picked up the nearest stereo record to hand, which happened to be the first disc of the three issued by Decca in the mid-1970s which make up this recording. Having been duly astonished by the sound quality I was hearing from the LP, I decided to record a short section for comparison to the existing CD issue of the same recording, and found the Decca LPs to be far more to my liking, with much more life to them than the rather dead and flat (by comparison) 2006 CD transfer.

As a result I ended up transferring the entire opera from my near-mint pressings and set about the minimal work required to remove occasional clicks, before applying 32-bit XR remastering technology to the transfer. This served to further enhance the already fabulous sound of the LPs. Meanwhile a US correspondent and Wagner aficionado contacted me to point out that the original mono LP issue of the recording had included fanfares and theatre bells which were omitted from later releases but added wonderfully to the atmosphere of a Bayreuth Festival production. As a result these were provided by him, and have now been added to the recording as it was originally released (this first track now presented in Ambient Stereo), prior to the start of the full stereo recording. 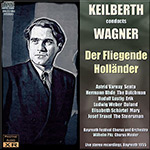 His Dutchman has a haunted, tormented quality (it’s in his voice) that brings the character to life like few of his colleagues

An early and successful attempt at stereo recording, this performance was originally issued in the single-channel format and had to wait about 20 years for its first two-channel release. When first released it offered, arguably, the best combination of sound and performance of Dutchman recordings. Now, despite Pristine’s excellent stereo transfer, I believe that that is no longer the case. Its principal assets are Hermann Uhde, Ludwig Weber, Josef Traxel, and the Bayreuth men’s chorus. Uhde, a specialist in portraying losers like Gunther, Klingsor, Telramund, and Wozzeck, gets to win one for a change—at least he gets “redeemed” at the end. His Dutchman has a haunted, tormented quality (it’s in his voice) that brings the character to life like few of his colleagues. Successful Dutchmen like George London and Simon Estes needed to be seen as well as heard, and proved to be less successful when they could only appeal to the ear. Not so with Uhde and Dietrich Fischer-Dieskau, the excellent Dutchman of Franz Konwitchny’s recording. I am sure that Hans Hotter was a great one, too (with Georg Hahn as Daland) but I haven’t heard the poor-sounding Krauss recording in ages. This recording’s Daland, Ludwig Weber, has just the right kind of deep voice and hearty delivery that’s appropriate for Daland. They’re a great pair. Josef Traxel is a nice, lyric Steersman and the recording captures the rich, virile sound of the men’s chorus. For some odd reason, the female chorus sounds older and less impressive to me. Astrid Varnay, a Bayreuth favorite, was already dipping into lower roles when she performed Senta in 1955. She makes all the right gestures and her voice rings through the house (I heard her there as Ortrud in 1960) but she sounds too mature; I prefer a younger-sounding voice in this role and hers moves just a bit sluggishly from note to note at times. Among the recordings I know, I prefer Deborah Voigt (James Levine), Marianne Schech (Konwitchny), Leonie Rysanek (Antal Doráti), and Lisbeth Balsley (Woldemar Nelsson). Senta’s fiancé (?), Erik, is one of the more tiresome bores in opera, a condition not mitigated by the effortful singing of Rudolf Lustig. The Mary, Elisabeth Schärtel, is good enough.

As far as Joseph Keilberth’s conducting is concerned, I am of two minds. Sometimes I appreciate the relaxed weight, the refusal to whip things up, the steady support for the cast, but at other times I just wish he’d get on with it and his conducting seems sluggish and heavy-handed. Here, I suppose I give him a B+ or a B. The orchestra’s sound is a bit dull and not well balanced during the overture but, oddly, seems clearer and better-balanced once the action begins on stage. There is ample directionality and clarity—you can even hear the spinning wheels turning in scene 2, and it is “scene 2” because Keilberth chooses the one-act version of the opera, which Wagner ultimately set in three separate acts. Cosima Wagner reverted to the one-act edition when the opera was first produced at Bayreuth in 1901, and both editions have subsequently been heard there and elsewhere. In fact, the recordings of Otto Klemperer and Woldemar Nelsson use yet another, earlier edition, which omits the Redemption Theme that normally ends the overture and the final scene/act.

Of the recordings I have heard, my preference is for Levine’s, which has a cast of strong voices. The Dutchman, James Morris, is no Uhde or Fischer-Dieskau but that’s no disgrace. Jan-Hendrik Rootering is a hearty enough Daland and Deborah Voigt, an appropriately young, healthy Senta. Add the luxury of Ben Heppner as Erik (he’s still a bore but at least he’s a great-sounding bore), and Paul Groves as a Traxel-like Steersman. Good sound, too. After that would come the weighty but generally well-sung performance led by Konwitschny (with Fritz Wunderlich as the Steersman!).

One nice touch: Unless the custom has changed, Bayreuth had one-hour intermissions between the acts of the operas. Outside the theater was a big tent where one could purchase lots of yummy non-dietary goodies as well as sample those tasty German beers. At the 45-, 50-, and 55-minute mark, a brass group on the front balcony summoned the audience back to the theater by playing a fanfare from the day’s opera, a nice touch. Unfortunately for the audience, the one-act Dutchman had no intermissions, so there was only one group of fanfares at the beginning of the opera and no goodies between the acts. You can hear a Dutchman fanfare at the start of this recording, an imaginative production touch.