This recording is part of what has long been regarded as one of the key Ring cycles, certainly of the mono era, but also more generally. A review by Steve Taylor at the Wagner Discography website states:

...it is certainly one of the great Rings. What makes it great? Firstly it has to be the cast of singers. I doubt that there has been a greater cast at Bayreuth in all the years since World War II. Astrid Varnay is nothing less than outstanding as Brünnhilde. She clearly has an intimate understanding of the role is an absolute pleasure to listen to.

Wolfgang Windgassen sings Siegfried. It is his first appearance in the role and he is heard to better advantage in other recordings. The thing that makes him special in this recording is his youthfulness. He is at his best in the first two acts of Siegfried but is also able to portray well the more mature character in Götterdämmerung. This is the performance of a major star in the making.

Towering over them both vocally as well as physically is the Wotan of Hans Hotter. He is at his prime here and it is worth buying the set for him alone. His singing in this set often astounds me. To my mind the best Wotan recorded. By the time he recorded with Solti he was past his peak. Listen to this and you will know exactly what I mean! All the other singers are equally fine. Josef Greindl (Hagen), Paul Kuen (Mime) Gustav Neidlinger (Alberich) deserve special mention. Only the Sieglinde of Regina Resnik fails to impress but this is a minor problem.

The conducting throughout is solid and Krauss gives the work the full structure which is needed. If there are any weaknesses in his reading they show up in Götterdämmerung. This was the first and only Ring which Kraus conducted at Bayreuth and he was clearly out to impress. His Parsifal of the same year was a record breaker. It was 23 minutes quicker than the previous record holder, his friend, Richard Strauss. No such haste with his reading of the Ring! It is a tragedy that he was to die the following year and we do not have any more Ring recordings by him.

However, he does go on to comment on the sound, labelling it as merely "acceptable". Meanwhile a correspondent and friend of this site wrote directly to me a short time ago:

"The Krauss 1953 Ring needs you. I think that Krauss' stock is rising, and you have already done him noble service. Now is the time for the killer edition of his Ring. Who better than you?"

I decided to investigate the possibility and started out with a few test settings for XR remastering. Quickly realising that these recordings most certainly could benefit enormously from this type of remastering I decided to bite the bullet and begin work on what we expect to become Pristine's first full Ring cycle.

The results are often astonishing - like the lifting of multiple layers of grime from an old painting to see bright colours resplendent beneath. Gone is the boxiness of previous issues, and in its place is a full and deep bass alongside a greatly extended treble, with huge impact on clarity of both voices and instruments, coupled with great dramatic impact.

Thanks to our download system we're also able to present the opera in a completely uninterrupted format both for FLAC and MP3 purchasers. The CDs are faded in such a way as to slightly overlap at the end of Scene Two and start of Scene Three, but nothing is lost here either.

This opera is of course already available - in its full cycle - on budget-priced CDs. I think when you hear the advances I've managed to make for this release you'll consider it an investment of time and effort worthy of your consideration. 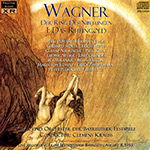