All the acoustic recordings Stokowski made only once

Plus his first Firebird Suite - in astonishing XR-remastered sound quality

Stokowski made his first recordings with the Philadelphia Orchestra in 1917 though, as Edward Johnson has noted, "between 1917 and 1924, they made an estimated 450 acoustic recordings, but the old method of playing into a large horn gave a very poor representation of orchestral sound, and of all their acoustic discs, only 60 or so were actually issued..."

Indeed, Stokowski's very first acoustic recordings were never released - his first attempts at the two Brahms Hungarian Dances included here were recorded on 22nd October, 1917, together with two works by Tchaikovsky. All four recordings were remade - in the case of the Brahms, just two days later, to become the first released recordings conducted by Stokowski.

It is indeed true, as Edward Johnson states, that in their 'natural' state, acoustic recordings made a pretty poor job of capturing anything much - though HMV's legendary producer Fred Gaisberg always had an affectionate soft spot for the way they captured the human voice. It has become a generalisation to state that the recordings captured little below 200Hz, and perhaps little above 2500Hz, or perhaps 3000Hz at a push.

However, as these recordings demonstrate, this was not necessarily the case - though it often takes the kind of advanced restoration processing that Pristine's XR remastering brings to these recordings to uncover the real range and quality of acoustic recordings. In the case, for example, of the first recording on this collection, there's a full bass going down to (and possibly below) 70Hz - a frequency extension of almost two octaves over the accepted lower limits. Meanwhile, throughout the recording one can clearly hear string harmonics in the 3500-4000Hz range, and where the brass plays at full volume there's genuine audio content up at (and beyond) 5kHz, which is not far off the upper end of electrical recordings.

In order to hear these extremes it has been necessary first to dramatically re-equalise sound that has been highly coloured and harmonically distorted by the horn it was recorded through. This therefore comprises the first stage of the XR process in this context. Secondly we then have to apply highly selective, targeted noise reduction to those frequencies which have received what has often been a quite enormous level boost, rooting out the noise and leaving as much of the actual recorded audio intact.

The results of this are genuinely astonishing - even more so when the records were slowed down to concert pitch (apparently it was common for Victor to deliberately record at below 78rpm so that their records sounded brighter when played back at their stated speed). The majority were out by up to a full semitone (though some were considerably closer to true concert pitch), and the correction of this adds further depth and authenticity to the instrumental sound, as well as giving a much more sensible idea of Stokowski's tempi.

The recordings here, ordered by date of recording, include every piece (or version) that Stokowski only recorded once and in the acoustic era. It was astonishing to learn that his later studio recordings included neither Mozart's 40th Symphony nor Beethoven's Eighth, and that as a result the movements here represent his only studio-recorded comments on these major works. Meanwhile the Dresden version of Wagner's Tannhäuser Overture was replaced by the later Paris version in all his subsequent recordings.

Finally, I decided to add one work which Stokowski recorded more than any other conductor - Stravinsky's Firebird Suite, in a rare acoustic recording which was made right at the end of the acoustic era, and was swiftly remade in front of a microphone. Like many of the recordings in this collection, it has never been reissued on vinyl or CD.

These XR-remastered recordings probably serve to knock about ten years off the perceived age of many of these recordings (though they won't of course disguise the substitution of tubas for double basses) - and these remarkable recordings can be enjoyed as if they were recorded in the early days of electrical recordings, rather than the dying days of the acoustic horn - albeit with at times slightly higher surface noise.

Transfers by Edward Johnson
Restoration and XR remastering by Andrew Rose, September 2009
Cover artwork based on a photograph of Leopold Stokowski 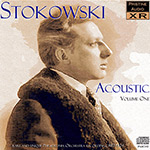 Sure enough, in the same mail that brought me that Cala finale was a CD titled “Stokowski—Acoustic, Volume One.” I am not clear on whether it is merely the first volume of his acoustic recordings or the first volume of a complete Stokowski series or something in between. Time will tell. Why do people continue to exhume these sonic antiques? A respect for history? Admirable sentiment. A desire to milk every last decibel and frequency wave from those hissing shellac grooves? Equally admirable. Stokowski, who began his Philadelphia career in 1912, had initially resisted making recordings because he found them too primitive. Then, he changed his mind, explaining, “I thought to myself: how stupid of you! You should record this way and although it is bad and you should try to make better methods of recording. . . . Then I tried to find better methods of recording and very slowly they were made better but the first records were made in 1917 and I’ve forgotten what they were. I’m glad I have because they were awful.”

Stokowski’s early recordings were made in the auditorium of the New Office Building in Camden. I think some later ones were made in a Camden church. In those days, as many players as could be accommodated were squeezed under a huge wooden horn. One source claims that 90 Philadelphia Orchestra players made it under the horn. I simply do not believe it. The orchestra sounds skimpy and brassy in the Brahms Hungarian Dances Nos. 5 and 6. I have read that, of the 450 acoustic sides he recorded, he only approved 66. The selections on the CD are presented in chronological order of recording (skipping a few) so that one can actually hear a slight improvement by the time one arrives in 1924 for his first of his eight recordings of the 1919 Firebird Suite (I believe this is the record for one conductor recording the same piece), which Stravinsky had only assembled five years before the recording. He cuts part of the finale, presumably to get the Suite onto four sides. He also streamlines Felix Weingartner’s orchestration of Weber’s Invitation to the Dance, omitting repeats. Among the steps Stokowski took to try to improve the sound was shuffling the players around for better balance and having the horns face away from him so that the bells of the instrument would face the front. He changed the orchestration of some music, having the woodwinds and brasses double some strings in the lower registers. You can hear tuba or bass saxophone replacing double basses on some recordings. He also tried various acoustic baffles to reflect the sound more. He must have felt somewhat relieved in 1925, when electrical recording came along, although Victor, at first, didn’t quite know what to do with it, continuing to record a reduced Philadelphia Orchestra in the company’s dead Trinity Church studio in Camden, and substituting a bass saxophone for the double basses and a contrabassoon for the timpani! By 1926, Victor’s engineers had gotten the message and the full orchestra began recording at the Academy of Music without any changes in the orchestration. Stokowski may have thought that some of these early efforts were “awful,” but they may prove to be of considerable interest for Stokowski admirers and those who are interested in the history of recording, per se.