The present release is the second of two devoted to Flagstad’s complete postwar American recordings for RCA Victor. As noted in the first volume (PACO 079), these recordings form one of the least-known portions of Flagstad’s discography, not least because of their lack of availability for most of the past half century. The bulk of the items featured here have not been available in any form since the 1950s, and none have previously appeared on CD. In addition, most of the songs taped in these sessions were the soprano’s only recordings of the works, which makes their reissue doubly valuable.

As noted in the earlier volume, the reason for the absence of these recordings from the catalog for so long has less to do with the quality of the singing – after all, it was only two months after the last session on this program that Flagstad recorded her iconic Isolde under Furtwängler – but rather with RCA’s lack of interest in reissuing anything other than her Wagner recordings. (Her prewar RCA song recordings have similarly been ignored, although at least those have been reissued on CD by independent labels.) Of particular interest here is the group of songs by American composers, including two by her longtime accompanist, Edwin McArthur.

Producer and Audio Restoration Engineer: Mark Obert-Thorn
Cover artwork based on a photograph of Kirsten Flagstad 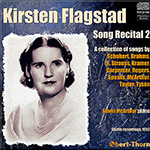