A fabulous Mozart Requiem is revealed in these new XR remasters

Beecham's brilliance heard here as never before, with sterling performances throughout

This recording of Mozart's Requiem is one of those happy instances which demonstrates the merits of Pristine Audio's 32-bit XR remastering system at its best, lifting what was a dull-sounding and indistinct choir into a degree of brilliance and clarity one would never have suspected from the original recording. Indeed, the entire recording has been transformed to an extent one can only really appreciate by hearing "before" and "after" side-by-side - especially in the Ambient Stereo version I wholeheartedly recommend here.

The later Schubert recording was far more successful in its original incarnation, but this, too, has been brought into even finer focus by the XR process, with additional use of phase-alignment software helping to produce a more sharply-defined stereo soundstage than before.

Together they're a superb-sounding record of Beecham at his very best. 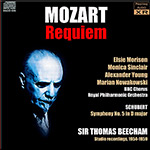 The Schubert is one of those works that brought out the charm in Sir Thomas’s music-making; the Mozart shows his serious side, as well as his willingness to tinker with a score

Here are two Beecham classics from the 1950s: the mono Mozart Requiem of 1954–56 and the early stereo Schubert Fifth from 1958–59. The Mozart is transferred from a copy of the English Fontana LP, the Schubert from the stereo LP on HMV Concert Classics, a budget reissue line. (Fontana, which reissue producer Andrew Rose insists on spelling “Fonata,” was a low-priced imprint of English Philips, which had the U.K. rights to the recordings Beecham made for American Columbia.) The Schubert is one of those works that brought out the charm in Sir Thomas’s music-making; the Mozart shows his serious side, as well as his willingness to tinker with a score, although so much is speculative regarding what some like to call “the text” of this work that this is not the heretical act it might be in, say, the “Jupiter” Symphony.

Since these recordings are well known to Beecham collectors, I will direct most of my observations to the sound of this reissue. I compared Rose’s transfer of the Mozart with my copy of the original Columbia LP. As Rose claims in his “Transfer Notes,” his XR process (about the technical workings of which I admit my ignorance) brings out the sound of the chorus in a satisfying way. I am less taken with what it does to the solo voices, which have an artificial-sounding reverberance to them and seem somehow changed in color. Overall the transfer sounds quite decent, although I continue marginally to prefer the LP.

The Schubert is another matter. I was able to do A/B comparisons with not only Concert Classics SXLP-30204 but also the original issue on ASD-345, as well as the currently available EMI CD. Rose has boosted the highs of his Concert Classics LP, but attenuated the bass. Moreover, since this LP reissue was weak in high frequencies to begin with, his boost doesn’t really restore what has been removed, but rather creates a peak in the upper midrange that is quite apparent on A/B listening. Even more telling is a comparison with the original LP edition (on a “white and gold” pressing, highly prized by audiophiles): The violins are bright and clear here as opposed to being muffled on the SXLP version and edgy on Rose’s transfer. The woodwinds’ instrumental signatures are clearer as well, and while the bass is somewhat deficient, the sound overall is far more natural than on either reissue. The EMI CD is a bit strident but otherwise more honest to the original timbres.

Mine seems to be the lone dissonant voice amid Fanfare’s chorus of praise for Andrew Rose’s transfers. I believe that reviewing historical CDs should involve A/B comparisons wherever possible, since the middle-frequency-rich sound Rose produces, like that of Michael Dutton, can be seductive if heard out of context. I further believe Rose should have used a superior source for the Schubert in particular. For that matter, since EMI’s own CD clearly benefited from the use of master tapes superior to any LP incarnation, one wonders why Rose bothered to issue it at all.

Rose clearly falls into the interventionist school of transfer engineers. It seems to me that his transfers are successful in inverse proportion to the quality of the original; the Mozart here is far more satisfactory than the Schubert, and he worked wonders with the several-generation dubs of Beecham’s Seattle Symphony broadcasts. Perhaps he can be persuaded to concentrate more on such arcane material, or at least to use the best possible source material for the recordings he does issue, rather than what may happen to be on hand. Recommended, qualifiedly, for the Requiem.

Richard A. Kaplan
This article originally appeared in Issue 36:1 (Sept/Oct 2012) of Fanfare Magazine.