"Vox seem to have made quite a speciality of Mozart’s piano concertos over the years, but this is the first time they have recorded the young Viennese pianist, Alfred Brendel, in any of them. One wonders why, because on the strength of these two performances Brendel has a combination of technique, temperament and sheer understanding of the music that is far too rare among pianists, I hope that Vox will give us many more of his performances of Mozart concertos, but 1 also hope that they will provide him with the recording he deserves. Although the internal balance (between piano and orchestra, and between the various sections of the orchestra) is adequate on the present record, the whole sound is over-resonant, which clouds the detail and damps out all brilliance.

With that off my chest, I can try to describe just why I like these performances so much. In the first place they are so completely characterised. Without going to dynamic extremes Brendel manages to avoid completely the neutral tinkling which often passes for Mozartian style. Here the phrasing is always alive, and when the music calls for it there is a virtuosity which is all the more exciting for being kept under perfect control. Moreover Brendel does not tie himself slavishly to the notes as printed in modem editions; he rightly feels free to join in the orchestral tuttis (particularly in K.453) and to insert the occasional cadential flourish. Since the orchestral accompaniment is thoroughly musicianly one gets far more impression than usual of co-operation between soloist and orchestra—the feeling of expanded chamber-music that these concertos demand..."

These three concerto recordings, which include what appears to be Alfred Brendel's debut recording - the Prokofiev Concerto No. 5 - all come from Vox recordings made in the 1950s. Born in 1931, Brendel had just turned 20 when he recorded the Prokofiev - an amazing achievement for a young man who had been sent to dig trenches in Yugoslavia at the age of 14 during the last days of the Second World War, and who took no further piano lessons after the age of 16.

This, and the Schoenberg he recorded in 1957, represent a rare incursion into the twentieth century for a pianist whose recorded repertoire is more well-known for his Beethoven, Haydn, Schubert and Mozart. As much as I would have liked to reproduce critical commentary on these recordings, the reviewers of the time concentrated more on describing what were exceptionally unfamiliar works to their audience rather than analysing Brendel's technique.

I have estimated a recording date for the Mozart of 1958. A Vox CD reissue mistakenly attributed it to "1961-63", but the April 1959 review clearly rules this out, and other discographies offer few clues. The two earlier recordings were both made in mono and are presented here in Ambient Stereo. All three have benefited greatly from Pristine's XR remastering process, bringing forth a fuller, richer and clearer tone to each recording. 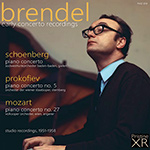