To say that Domenico Scarlatti (1685-1754) was prolific in his compositions for harpsichord is perhaps an understatement. We know of 555 sonatas for the instrument, most of them written in pairs to contrast and compliment each other. In this recording, however, Wanda Landowska chose freely from the entire canon to select the twenty sonatas presented here, writing in her notes:

From among the sonatas which seem to me the most beautiful I have chosen those, which grouped according to relationship and following my fancy, form a sequence and complete narrative of love and mad adventure.

It has been hard to decide which sonatas to take and which to omit from this world of wonders. I console myself with the thought that those which I have omitted will soon have their revenge. And as there are nearly 600 sonatas I shall be able to vary almost infinitely the magical chain of Domenico Scarlatti's enchantments.

Wanda Landowska was born in Poland in 1879, lived for many years in France before fleeing the Nazis in 1940, and eventually settled in the USA until her death in 1959. At a time when the harpischord was an almost forgotten relic of the past and playing styles were very much late-romantic, she almost single-handedly resurrected the instrument, and the precise playing style required by this music.

These recordings, originally released as a limited edition of just 500 sets, are perhaps the highlight of her European recording career. Clearly Landowska had a huge input in the recording - she was, after all, one of the foremost experts in the field - and contributed not just performances, but (as we have read) made her own personal selection of pieces, and wrote the delightful sleevenotes.

Of the Sonata in E minor (The Farewells), she writes:

This is, without doubt, one of the most beautiful and significant sonatas. At first it appears to lack balance because Scarlatti introduces a love theme and then interrupts it suddenly with a theme of energetic decision. But these mystifying interruptions and the opposition of the two themes are explained by their arrangement and alternation. They emphasis the accents of the drama which is about to unfold.

In fact, it is a little opera that we are witnessing. The first bars create the dry heavily-scented atmosphere of the piece. In the silence a woman's voice is raised, sustained by arpeggios on a guitar. We have scarcely heard this tender entreaty than it fades away. A decided theme springs up: it is a man's footstep resounding on the pavement. This theme is in its turn interrupted. A silence...then once more the woman's voice is raised, entreating and voluptuous. The theme of decision mingles with the more and more passionate accents of the worman. Their dialogue becomes a struggle in which the theme of decision triumphs: Fate ordains that the man shall depart. Again the footsteps are heard, near at first then fading away - an effect of perpective of which Scarlatti was particularly fond. The woman remains alone. The last bars, which are a pathetic summary of this tragedy, express the poignant farewells of the deserted woman.

Fanciful stuff? Perhaps - but clearly she has a strong involvement with the music! Of the selection offered below she is brief and to the point:

The rapid and fiery sonata in F minor passes like a flash of lightning.

Landowska's individuality shines out through all of these recordings - a review of an earlier transfer of her Scarlatti recordings states that her "playing has more character than most other harpsichord players put together". Hear it for yourself in these wonderful new transfers. 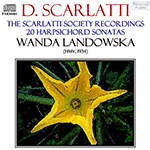 Domenico Scarlatti, famous son of the even greater Alessandro Scarlatti, wrote over 500 sonatas for the harpsichord while he was composer in residence for the King of Spain. We may fear that, as Stravinsky said about Vivaldi, "he wrote the same concerto 500 times". There may be much that is routine in Vivaldi's output, but there is very little that is routine in Scarlatti's. All that is present in both the inner and the outer world is paraded before one in the corpus of his sonatas.

While it is possible to appreciate Bach on the piano, I believe that Scarlatti demands the harpsichard in spite of the performances of Horowitz, Gilels and Pletnyev. The overtones, the plangency, the timbre, and the rapid ability to change colors of the harpsichord are demanded by Scarlatti's moods and themes.

I am amazed by Landowska's light and varied touch in these recordings. There is no hint of banging or exaggeration as I have found occasionally in her later work. All is balance and order in the best baroque style. The sound is natural, warm and clear. A 50 minutes of beauty and balance.