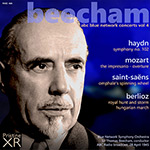 The Hungarian March from La damnation de Faust serves as a marvelous rabble-rouser, as if the New York audience were not sufficiently beside themselves with Beecham fever

The fourth and last in this series of broadcasts from 1945 features a programme close to the heart of Thomas Beecham; Mozart, Haydn, Saint-Saëns and Berlioz (reviews of Volume 1 ~ Volume 2 ~ Volume 3).

The Mozart is the overture to The Impresario, a perfect example of Beecham’s mid-period energy in this repertoire. His jaw-jutting joie de vivre infects his forces through wind arabesques and litheness of the string choirs. The performance fizzes by in 3:44, the remaining half minute being given over to applause. Rouet d’Omphale was a long-standing favourite, and one he seemed to enjoy taking to North America. WHRA’s Beecham box has a Toronto performance from 1960 which is somewhat slower – inevitably perhaps given his age – than this New York one. His NY forces are in splendid form here, the coagulant tone of the lower strings being especially notable, as is the fine brass playing.

The centrepiece is Haydn’s Symphony No.102 which differs somewhat in proportion to the 1958-59 LP performance that formed part of his famous late Haydn sequence. The opening Largo is splendidly sustained – one wonders how much rehearsal time Beecham had with his forces before these live broadcasts – which then leads into a combatively argued Vivace. The precisely chorded accents are accompanied by bonhomonious vigour, Beecham’s Haydn being the opposite of ascetic. He must have been agreeably amused by the applause that greets the end of the first movement. The slow movement is taken at a good, sustainable tempo, vested by those little touches of Beechamesque romance that lead, inevitably, to renewed applause. There’s a gutsy quality to the Minuet but the tempo is in no way slower than that taken by modern practitioners and there’s evidence of the Baronet’s foot stamping in the finale, which is suitably exciting, witty, and sweeping.

He ends the programme with two staples from his Berlioz armoury. The Royal Hunt and Storm compares favourably to his other recordings, except perhaps in absolute fidelity of sound quality whilst the Marche Hongroise makes its inevitable and indeed indelible impression in this galvanizing reading. He’s certainly up to tempo here.

It’s always good to hear announcer Milton Cross in this series, as he adds period ballast to the proceedings.

These four CDs, whilst not offering much by the way of repertoire novelty, have certainly surprised by virtue of their existence at all. It’s been a pleasure to get acquainted with them and I renew my appeal to trace examples of Beecham’s North American tours with his RPO in the early 1950s. Here’s one of my reasons: I want to hear Beecham’s leader, David McCallum, playing the Delius Concerto.

The Haydn 1795 Symphony No. 102 in B-flat Major provides the centerpiece for this high-energy concert from 28 April 1945, the fourth and last of Sir Thomas Beecham’s concerts sponsored through the ABC network. The onrush of musical dynamism begins earlier, with Beecham’s thoroughly spontaneous approach to Mozart’s 1786 singspiel The Impraesario, whose Overture permits all sorts of interior colors as well as witty rhythmic subtleties not lost on our engaged conductor.  Even narrator Milton Cross seems delighted to announce it as his prelude to the Saint-Saens symphonic poem that depicts the Lydian queen’s “humiliation” of the Greek hero Hercules – for the fatal fall of Iphitos – in the form of “women’s work.” A brilliant piece of orchestration – set as a mounting crescendo and then a fading away of the ostinato drudgery with a brief scherzando at the coda – the work confirms Beecham’s innate affection for this composer, whose various dances from Samson et Dalihah always shone under Beecham’s direction as superb “lollipops.”

A slow introduction – a unison B-flat followed by a five-note phrase – sets the Haydn Symphony No. 102 in motion, and the rather dreamy phrase suddenly bursts forth Vivace in a manner – rife with accents that refuse the beat – worthy of a certain rising composer from Bonn. When the music finally lands on a cadence, the manic energy does not yield to a gentle counter-theme but works the syncopation into a three-voice canon. The music modulates to an alien C Major before the flute announces a false respite, one whose tempests continue through chromatic shifts until Beecham can bring the coda to a resounding halt. The Adagio proves no less commanding, a lyrical transformation of an f-sharp minor Piano Trio theme. Brief but superlatively colored, the movement, like its predecessor, brings applause by a moved audience. Beecham always finds snappy dash in Haydn Menuets, especially in this whose stamping three-note figure imbues the music with an earth-bound, peasant wisdom. Haydn’s innovative use of dissonance makes the Presto finale no less elastic, and Beecham reminds us how many debts Beethoven owes to this imaginative masterpiece, especially given his own Fourth Symphony in the same key.

The two Berlioz works confirm Beecham’s spirited espousal of this composer’s music, especially any episode from the composer’s 1858 grand opera Les Troyens, which the conductor championed in its revival in 1957. The Royal Hunt and Storm figures from Act IV, a ballet-pantomime in which Dido and Aeneas wait out a storm in a cave. A specter of the gods urges Aeneas on to Italy, where his fate awaits. Exquisite pandemonium! In his commercial recoding for EMI, Beecham had the serene advantage of Dennis Brain in the horn part. The Hungarian March from La damnation de Faust serves as a marvelous rabble-rouser, as if the New York audience were not sufficiently beside themselves with Beecham fever.