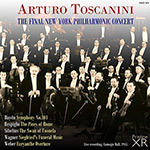 This in-house recording of the January 13, 1945 Pension Fund Concert at New York’s Carnegie Hall may prove to be the last available treasure we have of a unique collaboration. Andrew Rose has put us once again in his debt with an XR remastering of surprisingly good, but rough, source material. Toscanini, who had first recorded with the orchestra in 1926, before becoming music director, made no studio recordings with them after his departure from that post in April 1936. Little has circulated from guest appearances (there was a complete Berlioz Romeo and Juliet with Jennie Tourel included among the soloists, but it is seemingly unavailable). This concert was valedictory, and farewell.

The commercial recordings which Toscanini made when it was “his” orchestra total less than three and one-half hours—a shockingly small legacy considering the orchestra’s excellence and the conductor’s stature during his lifetime. One, from 1929, is the Haydn Symphony included here. This wartime program replicates Toscanini’s 1926 debut with the orchestra. The Haydn was recorded in the studio about three years after that first concert. Although the two performances are easily identified as the work of the same conductor, there are differences. The Carnegie Hall sound in Pristine’s remastering has more impact, if less suavity, than the early electrical product of RCA. I would say part of that greater suavity is also in the orchestral playing. The Philharmonic-Symphony, as it was then called, was a more refined band in the late 1920s and 1930s than later on, or today. Mengelberg’s tenure, followed by two seasons in which the Dutch conductor, Furtwängler, and Toscanini shared the podium, and then the Italian maestro’s incumbency, had created a remarkably sensitive orchestral machine. By 1945, it was Artur Rodzinski’s orchestra, and although most of Toscanini’s players had survived the Barbirolli years, a combination of World War II absences, Rodzinski’s personnel changes, and the personality of the Dalmatian-born Polish conductor had changed the orchestra palpably.

So, while the 1945 Haydn strikes my ear as excellent of its style, and it surely benefits from inclusion of the first movement exposition repeat, absent from the earlier recording, it is not the same orchestra, quite, as that which Toscanini had led before. Critic Olin Downes still thought the Haydn the best played portion of this concert (I don’t entirely agree) and it is surely very well done: a bracing performance of a composer Toscanini loved. The same may be said for the Respighi which, I believe, had its first New York hearing at the 1926 concert. Downes, who often seemed stuffy in “his” day, to say nothing of ours, found it bad music but bad in a glorious way. This performance seems to me to be extremely refined. Sonically, it is the least successful part of the concert, not poor, but lacking the quite amazing clarity of the Haydn, Sibelius, and Wagner selections, in particular. In this work, also, I prefer the Carnegie Hall recording made just over eight years later in the same hall with the NBC Symphony, utilizing RCA’s then best single-mike technique.

Aside from sonics, I find the later recorded performance seems to have a better over-arching grip on the piece. Interestingly, timings are identical, and for those who love the work, and also who love the unique qualities of both orchestras, it is interesting to compare the sound of the NBC’s Harry Glantz with the Philharmonic’s first trumpet, William Vacchiano, and also the really delightful frisson of the Philharmonic’s lower strings—and also timpani at numerous points where Respighi makes subtle use of them. Those come through very well; indeed, the sound improves, I should say, throughout the tone poem. The remastering is exceptional, as well, following intermission, particularly in the Sibelius and Wagner selections.

Toscanini did not play a huge repertory of Sibelius compositions, but was clear in his respect for the composer and performed several works, particularly in his NBC years. This performance of the ubiquitous “Swan” strikes me as fine as any I have ever heard—10 minutes in which time all but stands still. The sound comes up fresh, and one hears playing of intense concentration. Even more focused orchestral playing is heard the Wagner which follows. Conductor and orchestra had recorded, in 1936, near the end of Toscanini’s tenure as music director, a matchless performance of Siegfried’s Rhine Journey but the Funeral Music was not, for some reason, recorded at that time. What we have here is entirely worthy to stand with that studio effort, and is amazingly impactful in Pristine’s XR sonics. It is a stunning performance, nearly a quarter-hour of Wagner as we seldom hear it performed today. After the Wagner, I am not so sure closing with the exuberant Weber was the best of ideas, but that was the way programs were made nine decades ago and replicated at this concert.

We have so little else; there could have been much more. There is a Beethoven Fifth from the 1930s which many value highly; a Bruckner Seventh which confirms the conductor was wise to perform that composer seldom. The remarkable 1935 Beethoven Missa Solemnis has been four times remastered by Richard Caniell. The concert closing the 1936 season is said to have been captured—all Wagner, including Gertrude Kappel in the Immolation Scene. To my knowledge, it has not as yet surfaced. May we hope?

This distinguished release is not merely a period piece. These are examples of orchestral playing and interpretation which demand to be heard, and which, fortunately, we can hear with remarkable clarity in Pristine’s offering; this one is urgently recommended.