"GINETTE NEVEU was the first of the remarkable batch of young artists I found for my companies in my post-war visits to the Continent. Within a few days of the liberation of Paris I looked up Jacques Thibaud, to find out who had come to the forefront in the war years. He mentioned three string players— Ginette Neveu, Pierre Fournier and Giula Bustabo. I had known of Neveu before the war, first as Carl Flesch’s best pupil in the middle thirties, then as a young recitalist in Berlin—I think it was in 1938. Her first records, the Strauss Sonata and a posthumous Chopin Nocturne, were the fruits of that Berlin success.

Thibaud spoke glowingly of her extraordinary vitality and superhuman concentration, but it was with Francis Poulenc and Pierre Bernac that I first met her. Her first concert in London at the Wigmore Hall in 1945 was given under the patronage, if I remember rightly, of the French Cultural Attaché. It was what every concert should be—an experience that added to the sum of the life of everyone present.

It was at once evident that Ginette Neveu was technically a violinist of the front rank; but technically accomplished violinists are not all that rare. Her unique quality was the intense and passionate beauty of her playing, an incandescent and fiercely primitive passion that seemed always on the verge of breaking all restraint, yet just held in leash by powerful will and intellect. Her face was extraordinary; not conventionally beautiful in repose, and she had the slightly prominent eyes and throat that are often associated with over-active thyroid glands. But in the moment that her hand touched the strings her face was transfigured into a wild, ecstatic beauty. As she played she crouched over her fiddle like a tense pantheress about to spring, and the sound she produced pulsed with unspeakable intensities.

A couple of days after her concert she signed the recording contract, which was about to be renewed when she met her tragic death.

The first records we made together were the Sibelius Violin Concerto. It was in November, 1945, and London was enveloped in a fog so thick that we could not see from the recording room to the stage in the big Abbey Road Studio. It was the only free day she had in the middle of a busy tour. I had not hoped to complete the work in two sessions. The orchestra—the Philharmonia—was doing its first major recording; Walter Süsskind was doing his first international recording, and it was our first experience of Neveu in the studios. The Gods and her fantastic concentration were on our side. Between two and five we had recorded the whole of the first movement. In the hour and a half interval between the sessions any other player would have rested; not Neveu. Striding up and down the studio she practised the whole time through. By eight-o’clock the neck abrasion, which is the violinists’ trade mark, was an angry scarlet wound and the left side of her chin was near to bleeding. It made no difference to her. Smoking incessantly she worked through until shortly before half-past nine, and asked that the orchestra should do half an hour’s overtime to finish the work. Before ten o’clock the concerto was completed. All of us were exhausted—except Ginette Neveu. She came up to my room, and played through the Walton Concerto, which she was learning. When, a few minutes before midnight, I got her back to the Piccadilly Hotel, her only complaint was that there was no restaurant where we could sit and start to talk.

Later in Paris I learned to know her better. At that time she cycled round Paris in heavy shoes with short socks and bare legs, a tweed skirt, and a sweater, with her precious fiddle strapped across the handlebars. She had a mind. Lunch lasted sometimes four hours, and she talked in her heavy, hoarse deep voice with the same intensity with which she played of music, politics, life and art. One of these days I hope to write of her theory and practice of musical preparation—for those who have the energy, will and single mindedness; it is at once the most rigorous and improving regime I know..."

These XR remastered were prepared from later vinyl reissues of the Neveu EMI recordings, all of which had been transferred from the original masters with the exception of the Ravel Tzigane, which had to be transferred from mint 78rpm pressings. The extra life that XR remastering and Ambient Stereo processing brings to these already-amazing recordings is quite astonishing to hear.

XR Remastered by  Andrew Rose
Cover artwork based on a photograph of Ginette & Jean Neveu, London 1946 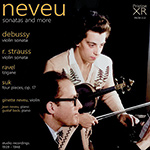