MUSSORGSKY Pictures at an Exhibition
PURCELL Suite from Dido and Aeneas
CAILLIET Variations on “Pop! Goes the Weasel”
Works by J. S. Bach and Turina

Transcriber, arranger and composer Lucien Cailliet was born in Dijon in 1891.  He studied composition and orchestration in Dijon and Paris.  During World War I, he was a bandmaster in the French Army Band, with which he toured the United States in 1915.  Four years later, Leopold Stokowski hired him as a clarinetist for the Philadelphia Orchestra.  Not long after his arrival, an orchestration of the Marseillaise was needed for a guest singer, and Cailliet volunteered to provide one.  Pleased with the results, Stokowski continued to work with him over the next several years in his transcriptions of the works of Bach and others.

Cailliet’s exact role in the orchestrations credited to Stokowski has long been a matter of controversy.  Writing to Stokowski biographer Oliver Daniel in 1978, Cailliet said that the Marseillaise project “started me in doing all his orchestrations.”

In fact, the next one he asked me [to do] was the [Bach] C Minor Passacaglia. Of course, we had some discussions before as, after all, he was an organist and a famous musician. [. . .] I must confide in you that as the situation developed, Stokowski asked me from the beginning not to mention or speak about it and keep the situation “entre nous” and adding: “The people would not understand.”  That is how the name of Stokowski appeared on the programs as orchestrator.

Earlier, however, in an interview with broadcaster Steve Cohen, Cailliet credited Stokowski with a greater role in the Passacaglia transcription:  “It was his idea completely, and of course he was himself a very good orchestrator.  He made a very good choice of instruments.”

Based on the experiences of others who worked with Stokowski in producing transcriptions, it is believed that the conductor indicated his choices for instrumentation on the score for the transcriber to carry out.  Stokowski would then edit and make further alterations to the score.  Still, the collaborations with Stokowski provided Cailliet with valuable training.

Cailliet was not credited for his transcriptions, at least on record, until Eugene Ormandy’s arrival in Philadelphia as co-conductor in 1936.  (Indeed, the Bach Prelude and Fugue in F minor which opens our program was Ormandy’s very first recording with the Philadelphians.)  Stokowski did record one transcription specifically credited to Cailliet (Turina’s Sacro-Monte), but it was never issued on 78s.

In 1937, Cailliet left the orchestra to teach at the University of Southern California.  Before his departure, Ormandy commissioned him to make his most significant transcription yet, that of Mussorgsky’s Pictures at an Exhibition.  Working in the shadow of Ravel’s already famous version must have been daunting, but Cailliet, writing for the ensemble he knew so intimately, acquitted himself well with his imaginative instrumentation.  He also reinstated the Promenade before “Limoges”, cut by Ravel.  This remains the only recording of Cailliet’s version, except for the “Ballet of the Chicks” movement, which Leonard Slatkin included in his composite edition using different orchestrations of the work.

In the mid-1940s, Cailliet left teaching to work as an (often uncredited) orchestrator for Hollywood films, including such classics as She Wore a Yellow Ribbon, Red River and The Ten Commandments.  He died in Los Angeles in 1985.

MUSSORGSKY-CAILLIET:  Pictures at an Exhibition 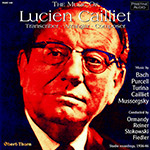 There is no question of the visceral excitement that is imparted to Bach’s majestic Prelude and Fugue in F Minor...

Long-lived French-American Lucien Cailliet (1891–1985) is undoubtedly best known and remembered in the band world, since his transcriptions of Wagner’s “Elsa’s Procession” from Lohengrin and the Finlandia of Sibelius have long been staples in that realm. In 1919, Leopold Stokowski brought him into the Philadelphia Orchestra as clarinetist, and soon became aware of his skills at orchestration. There is some debate, in fact, as to how much of Stokowski’s own arrangements are actually the work of Cailliet. About a year after Eugene Ormandy came into Philadelphia in 1936 as co-conductor of the orchestra, he hired Cailliet (who was then leaving to assume another position) to make an arrangement of Mussorgsky’s Pictures at an Exhibition, as he had by then become Ormandy’s arranger of choice as well. Ormandy could not have failed to notice the success of the Koussevitzky-commissioned Ravel orchestration of Pictures, and thus desired to have his own version of the piece. This was not because of contractual reasons between Koussevitzky and Ravel, for the Russian conductor was given only, if memory serves, five years of exclusivity in his 1922 commission from the French master. I would therefore guess that professional jealousy played a big part in Ormandy’s commission, which was premiered on February 5, 1937.

As one might imagine, the intricate dance that Stokowski and Ormandy were engaged in during the transitional years of 1936 to 1941 (at which time, Ormandy took over as exclusive music director of the Philadelphia Orchestra) may well have contributed to Stokowski’s desire to make his own version of Pictures. Ostensibly, he was competing with Ravel, claiming that Ravel’s version was too “French,” but I strongly suspect that he thought that he could also do a superior job in orchestrating the work from what Cailliet had done and perhaps gain bragging rights over Ormandy. Regardless of his motive, Stokowski’s 1939 version has run a very distant second to Ravel’s in terms of performances and recordings, but it is nevertheless ahead of every other orchestration in that regard. Caillet’s effort, on the other hand, is somewhere near the back of the pack. I’ve never found evidence that any other conductor than Ormandy ever even performed the version (a very partial exception is the “Ballet of Unhatched Chicks” movement that Leonard Slatkin has used in one of his compilations), and although the score and parts are reputed to reside in the library of the Philadelphia Orchestra, they are said to be in questionable performing condition.

Has history adjudged Cailliet’s version fairly? Generally, I think yes: Just listen to the wimpy woodwind opening of the work, the rather unimaginative accompaniment to the solo English horn in “Il vecchio Castello,” or the too cumbersome version of “Tuilleries.” Still, there are some worthwhile moments in this version, including the snarling brass in “Gnomus,” the melancholy solo cello at the end of “Samuel Goldenberg,” the orchestration of the Fifth Promenade (omitted by Ravel), or the use of unison horns and trombones at the beginning of “Bydło” in place of Ravel’s overly tame tenor tuba, which cannot adequately portray straining oxen (I do find Ormandy’s tempo in this movement inexcusably fast, however). In any case, this transcription is worth hearing, if nothing else, as a historical artifact (and why can we not also have a recording of the early [1924] version by Leonidus Leonardi?)

What of Cailliet’s other orchestrations? The Bach selections are rich and opulent, in keeping with the era of sonorous orchestration that existed in the 1930s (I would guess that the famous—notorious to some—Beecham orchestration of Handel’s Messiah also comes from around the same time). There is no question, in any case, of the visceral excitement that is imparted to Bach’s majestic Prelude and Fugue in F Minor. Only orchestrators of this era, of course, would have added a prominent harp part to “Jesu, Joy of Man’s Desiring,” and Cailliet had to fill in implied harmonies in the Preludium from the E-Major Partita, originally for solo violin. Purcell also gets the lush treatment (slightly less than that encountered in the Bach selections), but these movements from Dido and Aeneas are still fun to listen to.

With the Turina’s “Sacro-monte,” we come to a much less anachronistic orchestration. Turina was Cailliet’s near contemporary, although he lived only about half as long. This brief selection, one of his Cinco Danzas Gitanos, was originally for solo piano, and the light-hearted and jolly character piece sounds quite convincing as an orchestration that Turina himself might have done. The CD concludes with Cailliet’s original work, Variations on the Theme Pop Goes the Weasel, a brief bit of jollity that has gained quite a few performances in both the orchestral and band worlds.

Producer Mark Obert-Thorn has done his usual exemplary work in the transfers, which provide life-like presence and clarity of texture, producing sound that is about as good as one can hear in recordings from this era. The Mussorgsky portion of this CD was previously issued on a Biddulph CD (also with transfers by Obert-Thorn), and I cannot hear any difference between the sound of that CD and the present one. I also A-B’d the Pictures with my original Victor 78 set, and found that his transfers were true to the original, while virtually eliminating the surface noise. This release constitutes an important historical document, and is worth acquiring on that basis alone. The musical enjoyment it also affords is icing on the cake. I do wish, though, that he’d utilized both sides of the leaflet so as not to require a virtually illegible (six point?) type size to get the notes onto a single page.