My initial thoughts when listening to this recording were mixed. For large parts of it the sound was adequate, though not wonderful But then I'd hear a nasty edit and a section of really poor quality audio which tempted me to abandon the whole exercise.

But what I discovered in the process of restoring this recording was far more interesting that I ever imagined. It's a perfect example of a new technology not being properly understood or handled - rather than recording the musical repeats, these were simply copied (badly) and spliced in (very badly) from the original material!

Now whilst we can't go back and re-record the poor-quality dubs used on the vinyl release, we can now remake those edits, splice in the originals without loss of quality, and do this to a degree of precision undreamed of in the 1950's.

That, coupled with the resolution of a number of major sonic flaws, especially with regard to tonal balance, mean that we can now present the record as it should have sounded 52 years ago, rather than the deeply flawed product put out originally. 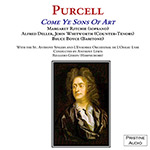 When I was young, I considered Purcell to be a rather feeble forerunner of Handel. The recording that changed my mind and made me realize that Purcell was great and original was a rather dullish-sounding 10" import in an unattractive box featuring Alfred Deller, supposedly a man, singing in a register I associated with women. I gradually got used to him and his colleague by means of their magnificent duet "Sound the Trumpet". I never got over how Deller and John Whitworth challenge each other with roulades over Purcell's ceaseless accompanying rhythm. What can one say about a set of singers that also includes Margaret Ritchie and Bruce Boyce? The orchestra and chorus perform with tremendous vigor.

In order to be sure that I was not just suffering from nostalgic dementia, I played a 1992 recording of the same work with Robert King conducting the Oxford New College Choir and the King's Consort. It was BORING! Everybody seemed to be just singing the notes, whereas in the Deller recording everybody seemed to mean the notes. Although it was in stereo, even the sound was boring. The singers were very good, but the whole affair seemed listless after the Deller recording under review. I noticed that the King recording said, "Complete Odes and Welcome Songs - Volume 8". Maybe they were really yearning to do "West Side Story".

To me, the Pristine Audio Restoration has made the Ancient L'Oiseau Lyre recording equal or even superior to the 1992 Hyperion in terms of musical punch, freedom from noise and detail. It means that I can listen to an historical recording and forget the historical part. It potentially opens up for me what is perhaps the greatest period of classical performance practice: 1926-1957.