This recording came to me through a collector (who prefers anonymity), with the following compelling explanation as to its importance in the history of recorded music:

"This Boris has two major selling points for me: Boris Christoff in one of his signature roles; and Reginald Goodall as conductor. Goodall’s discography is really small, largely consisting of Wagner recorded/broadcast with ENO from 1968 onwards, plus some Bruckner [issued by BBC legends], and Britten [in the 1940s]. Yet he was a house conductor for the Royal Opera for a long time, and this is the only complete recording I have been able to find of him between the 1940s and 1968. Finding a good tape of the performance has taken a long time. The one circulating among collectors is poor quality and even Goodall’s own tape collection (now donated to the British Library) didn’t contain a good copy. I finally tracked down a good quality tape from a recently  deceased collector..."

The tape in question has suffered over the years somewhat, and I've done my best to restore section of dropout and the like. Sound quality was otherwise very good, and has been further assisted by XR remastering to produce a remarkably vivid sound for a live production of its day. Originally broadcast over three segments, one for each act, I've retained only the opening announcement and cut short the rapturous applause in order to squeeze the music onto two CDs.*

Note too that the performance, and thus the recording, is based on Mussorgsky's original three act version of the opera, and not the longer and more usually recorded four acts (plus prologue). Though the bulk of the music is identical, two lengthy scenes did not appear in Mussorgsky's original score for the opera, as later revised and re-scored by Rimsky-Korsakov. There are also some differences in orchestration and pitching in this original version of the opera. For further reading on the complex history of Boris Godunov and the various versions produced over the years, I recommend following the Notes link above. 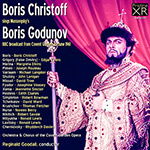 The final scene was omitted from our source tapes, and with a final announcement edited onto the end we assumed that this was the full performance of Mussorgsky's opera as broadcast.

Since then a copy (alas of somewhat inferior sound quality, even after full XR remastering) of that final scene, running to a little under twenty minutes (including applause and closing announcement) has come to light, and we are pleased to offer it to all download and CD purchasers as an additional, uncharged-for, zipped download containing 24-bit FLAC, 16-bit FLAC and 320kbps MP3 versions.

It has been tagged as Track 46 in order to be added to the original album downloads as a final track, and it can of course be copied to audio CD using either the 16-bit FLAC (full CD quality) or the MP3 (near-CD quality) audio file, depending on your CD writing software.

Many thanks to Daniel Morrison for providing this source material.

This is an extremely important release, both for Christoff’s live Boris and Goodall’s richly colored and very powerful conducting

This is an extraordinary discovery by Pristine Audio, one of great importance to general collectors and specialists. It is one of the earlier performances of Mussorgsky’s original orchestration of the opera, and an opportunity to hear the great Boris Christoff in the title role without his party trick of also taking the roles of Pimen and Varlaam, as he did on studio recordings. And it is also an opportunity to hear the under-recorded conductor Reginald Goodall in repertoire not normally associated with him.

This performance has apparently circulated before in reportedly muffled and compressed sound on cassette and on the House of Opera label on CD. I have never heard it and it never received wide distribution. Now a collector has provided to Pristine a superb off-the-air tape made from the BBC broadcast, and Andrew Rose added his XR process to give space and perspective to the sound. The result is a terrific-sounding live performance from the early 1960s, almost comparable to studio recordings from that era (though without the specific separation of real stereo).

Stating that this is the “original version” is not sufficient, because there are two of those, with more modifications possible. This version performs the St. Basil and the Kromy forest scenes, and Pimen’s account of the murder at Uglich. Also included is the scene where Fyodor tries to distract his sister by showing her the pretty new clock, a clock which will become pivotal in a later scene for Boris. The Polish Act, though, is heavily cut, with Rangoni missing entirely.

Followers of Goodall will hardly be surprised at his general favoring of slow tempos. However, neither will they be surprised at his ability to maintain tension and line through those tempos, and to present the drama inherent in the score with intensity and conviction. His Boris has the same internal unity and feeling of ensemble as his finest Wagner performances. Singers interact with each other, and with the text, so that at no point does this sound like a vocal concert or a demonstration of great singing. Singers and orchestra are as one, all focused on the meaning of every phrase and its place in the shape of the whole. The magnificence and pomp of the coronation is conveyed, and the accumulating sense of doom is built up with immense power as well. Mussorgsky’s sparer orchestral palette responds well to Goodall’s approach, and he balances well the elements of public glory and personal tragedy that make up this opera. Those who don’t really listen carefully seem aware mainly of Goodall’s slow tempos. But if you immerse yourself in this performance you notice of his intense attention to color, balance, texture, and dynamics—and to emphasizing the arc of the score.

Although some have accused Christoff of over-emoting in the title role, I have never felt that. He was one of the most important interpreters of Boris in the world in the 1950s and 60s, and the reasons are clear. His voice was dark and rich, he was a huge dramatic presence, he was able to change the color of his sound, and to shade his dynamics for maximum theatrical impact. He was clearly an intelligent singer and a spontaneous one, and his Boris is frankly as close to ideal as anyone during his time or after. If a singer can be said to have owned a role, Christoff owned this one. What damages both of his EMI recordings is his willingness to take on the other two main bass roles of Pimen and Varlaam. He claimed it was the idea of the conductor of the first recording, Issay Dobrowen, but he should have said “no” (just as he allegedly said “no” to Karajan when the conductor suggested the role of Don Giovanni to him), and certainly Dobrowen didn’t suggest it to him for the second recording conducted by Cluytens. It was a bad idea—he couldn’t vary his sound enough and one never felt one was hearing three different characters. As James Miller pointed out in one review, one got sick of hearing the Christoff sound so frequently in the opera.

Here we don’t have that problem, and we have the added advantage of Christoff performing the role in a staged production, with the extra intensity and frisson that almost always comes with a real performance as opposed to a studio recording. He is, in a word, monumental here. It is not just a performance of intensity and power, but also one of subtlety and careful inflection. Christoff conveys clearly the outer power and inner pain and doubt of the character, balancing the elements better than most, and with a vocal glory superior to most.

Langdon’s Varlaam is wonderfully sung, conveying the drunken monk without resorting to slapstick. Rouleau’s Pimen is also well sung and acted, though I would prefer a slightly more focused tone. This was clearly an important production to the Royal Opera House, as they cast luxuriously throughout. Josephine Veasey as Fyodor and Jeannette Sinclair as Xenia are superb, John Lanigan’s Shuisky is oily but again without exaggeration. Top to bottom, the cast is first-class.

The Kromy Forest scene, which takes place after the death of Boris, was included in this performance, but was missing from the source tape used by Pristine and was thus not included on the two discs (and would not have fit had it been available at that time). A copy of that scene from a different source for the same performance was made available to Pristine, which has in turn made it available at no cost as a download. The sound is not as rich, but is more than listenable, and the scene is well performed.

Pristine has included BBC announcements, but they are tracked separately so one can skip them. The performance is fitted onto two discs, which is appreciated. As usual, Pristine provides no texts and minimal notes, but the inclusion of an original London Times review of the production and informative production notes from Andrew Rose are worthwhile.

As I said at the outset, this is an extremely important release, both for Christoff’s live Boris (without the distraction of multiple roles for him) and Goodall’s richly colored and very powerful conducting. This would be my own preference for recordings of this opera using Mussorgsky’s original orchestration.