"I hugely enjoyed this voyage through the music of Harl McDonald. He is a composer of great gifts marvelously realized" - Fanfare

Harl McDonald was born on a cattle ranch near Boulder, Colorado on July 27, 1899 and grew up in southern California. Musically talented from an early age, he studied piano and French horn, becoming proficient enough in the latter to join the Los Angeles Philharmonic while still in his teens. He received his Bachelor’s degree in music from the University of California at Berkeley in 1921. An orchestral suite he composed won a national prize, allowing him to complete his compositional studies at the Leipzig Conservatory the following year.

Returning to the United States, he began a career as a piano soloist, accompanist, and lecturer on composition, also working as a church choirmaster and, occasionally, a boxer. He received an appointment to teach piano at the Philadelphia Musical Academy in 1924. Within three years, he joined the faculty of the University of Pennsylvania, leading several of its choral groups and eventually becoming the head of its music department.

It was probably while preparing some of the university choruses that appeared with the Philadelphia Orchestra that McDonald first met Leopold Stokowski, who encouraged his compositional activities by premièring his Santa Fé Trail Symphony in 1934, the first of several McDonald premières the conductor would undertake. That same year, McDonald was appointed to the board of directors of the orchestra, eventually becoming its manager in 1939, a post he would hold for the next sixteen years.

McDonald was a prolific composer; by 1944, it was estimated that he had written over 150 works. Several of them were influenced by his upbringing in the American southwest with its Spanish legacy, which can be heard in The Santa Fé Trail and San Juan Capistrano. Other compositions were suggested by folk themes, such as those in The Legend of the Arkansas Traveler and the Hebraic Poems.

From Childhood came about as a result of McDonald’s visit to Philadelphia Orchestra harpist Edna Phillips’ home. She was singing old English nursery rhymes to her children while improvising accompaniments on the harp. McDonald suggested that a suite based on the songs would make a good piece, which led Phillips and her husband to commission him to write one. The first movement quotes I saw three ships and Lavender’s blue; the second features The jolly miller and Three blind mice; while the third combines references to There was a lady loved a swine, Oranges and lemons and St. Paul’s steeple.

Interest in performing and recording McDonald’s works waned after his death on March 30, 1955 in Princeton, New Jersey. Although Ormandy conducted The Santa Fé Trail as late as 1971, no new recordings of McDonald’s compositions have appeared in nearly 60 years, and reissues of earlier ones have been sparse. The Stokowski and Koussevitzky sides were released on CD in the early 1990s, but Ormandy’s recordings of The Santa Fé Trail and Cakewalk have not been seen since the LP era, while the Hebraic Poems and From Childhood have never previously been reissued. It is hoped that the current release will spark a new interest in this neglected composer. 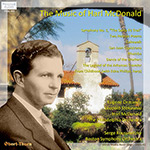 A composer of great gifts marvelously realized ... music that charms our lives and lightens our existence

This is an exceptionally valuable release. How is it that an American composer whose music was recorded by Stokowski, Ormandy, and Koussevitzky fades from consciousness? I could find only two available recordings of Harl McDonald’s compositions made in almost the last 60 years. Based on the contents of the present CD, this is a grave injustice. McDonald was born on a cattle ranch near Boulder, Colorado in 1899, and his music compares quite favorably with that of another western-born Romantic composer, Howard Hanson. The most prominent positions McDonald held were head of the music department at the University of Pennsylvania and, for 16 years, manager of the Philadelphia Orchestra.

McDonald’s music is agreeably tonal and rich in color. He is a master of orchestration, with a palette that alternately is delicate, earthy, and kaleidoscopic. The works on this CD generally are programmatic. McDonald has a penchant for creating atmosphere and suggestive dramatic content. The three great conductors represented here clearly relish the opportunity to visit the scenes and personalities conjured up by these works. Mark Obert-Thorn has done his usual conscientious job of securing honest sound out of these 78s, but McDonald’s music cries out for the spaciousness and subtleties of modern digital recording. Surely his compositions are naturals for Naxos’s American Classics series and other labels’ explorations of the American repertoire. For the moment, at least, this CD gives us much to savor.

It may be just a coincidence, but McDonald’s First Symphony, “The Santa Fé Trail,” was composed one year after Ferde Grofé’s Grand Canyon Suite. McDonald’s piece is less a traditional symphony than three related symphonic poems. He makes no allusion to Native Americans in the Southwest, so by today’s standards the Symphony is politically incorrect. The first movement, “The Explorers,” is like the Prelude to act I of Lohengrin in that it begins softly and mysteriously, builds to a climax, then subsides. The next movement, “The Spanish Settlements,” functions as a scherzo, with swirls of vivid color. “The Wagon-Trains of the Pioneers,” which concludes the Symphony, features music alternately of dramatic hardship, chorale-like beauty, and triumph. I would say “The Santa Fé Trail” is almost as good a symphony as Hanson’s Second, the “Romantic.” The Two Hebraic Poems show the influence of Ernest Bloch combined with McDonald’s typically warm, engaging sound. The second poem feels like Hassidic dance music at times. “Cakewalk” summons up the atmosphere of a minstrel show, including even a soft-shoe episode. McDonald makes imaginative use of blaring brass and wind choirs. Ormandy conducts all of the above works vividly and with frequent virtuosity.

Koussevitzky must have loved San Juan Capistrano—Two Evening Pictures. In the first picture, McDonald paints a sensitive rendering of the mission, with a Respighi-like feeling for portraiture in sound. “Fiesta,” the second picture, offers delicate handling of Latin color and dance. Another Boston maestro, Keith Lockhart, revived “Fiesta” for the Boston Pops’ American Visions CD.

“Rhumba,” an apotheosis of this dance craze, pulses with excitement. What I would give for a video of Stokowski’s performance! The piece belongs in Gustavo Dudamel’s repertoire. Stokowski discerns in the “Dance of the Workers” the kind of entr’acte he did so well. He delivers a wealth of color in The Legend of the Arkansas Traveler. This is the sort of stylized folk art one finds in the paintings of Thomas Hart Benton, complete with hoe-down. Concertmaster Alexander Hilsberg plays an elegant solo.

When McDonald visited Philadelphia Orchestra harpist Edna Phillips at her home, he found her singing old English nursery rhymes to her children while improvising a harp accompaniment. The composer suggested this might be the basis of a work, which became From Childhood. Its solo harp part is charming, while McDonald handles the blend with orchestra with immense finesse. He gives the harp sonically an antique flavor. There is nothing coy or patronizing in his use of the nursery rhymes. The work presents a rarefied vision of childhood, ages away from our world of iPads and video games. There are some suggestions of children’s mischief, however, as in a brassy treatment of Three Blind Mice. Edna Phillips plays elegantly, while the composer proves a deft and accomplished conductor. From Childhood also was recorded by harpist Ann Mason Stockton with conductor Felix Slatkin.

I hugely enjoyed this voyage through the music of Harl McDonald. He is a composer of great gifts marvelously realized. Isn’t it time to rediscover music like this, music that charms our lives and lightens our existence?