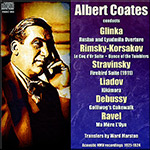 Review of this Firebird Suite recording, 1925:

"I can imagine strife in many a peaceful home when Part 4 of this suite is reached.

Father: "I call that a noise."

Son or Daughter, with that desire to irritate so conspicuous in happy families : "Noise? A term used by the Elizabethans to denote a band or company of musicians."

Mother, reading newspaper, quite irrelevantly remarks "How terrible these Bolshevists are."

Son, of course, misunderstands, and replies with withering scorn "Naturally you cannot understand that the juxtaposition of tonal masses, the empirical atonalities, etc., etc." (until the entire family is flattened out!)

The Firebird music suffers more from being detached from its proper setting—the theatre—than did the later work Petrouchka. It will sound extraordinarily scrappy and disjointed to anyone who has not seen the ballet. Moreover, the titles affixed to the records do not correspond very satisfactorily with the plot given in the supplement. Further, Mr. Percy Scholes' excellent analytical notes, done for a B.B.C. concert at Covent Garden, from which I have culled some information, present the music in a different sequence to that given here. Perhaps, therefore, the following analysis, merely a personal interpretation fused with the main outlines of the story, will be helpful.

Part 1.—An enchanted garden with something sinister and evil lurking in the background. A scene bathed in half-light. After many obscure mutterings the air suddenly grows tremulous with sound, a rich glow dispels the shadows. The wonderful exotic fire bird flutters into the garden.

Part 2.—She dances round a silver tree loaded with golden fruit, seeming to the young Prince Ivan (hidden in the bushes) the loveliest thing he has ever seen. Greatly daring he captures her, but she begs to be released, offering him a gift of one of her feathers.

Part 3.—She departs. The garden is now filled with a band of maidens headed by a Princess. They too dance with charming vivacity and have a game with the golden apples. At dawn they disappear.

Part 4.—The Prince is seeking them when suddenly there appears the monstrous retinue of the evil spirit of the place, the demon king Kastchei The magic feather preserves Ivan's life, but the Firebird also comes to his rescue. She makes the bevy of wild Indians, warrior Turks, Chinamen, Clowns, Imps, Hobgoblins, Ogres, and Apes burst into a frenzied dance. While they are thus engaged she directs Ivan to smash a huge egg in a casket in which is hidden the demon's life. This done the monster dies and the loathsome creatures vanish. Ivan marries the princess.

The highly coloured orchestration rather blinds one to the lack of any real "meat" in the music. It is a positive relief on reaching Part 3 to encounter a genuine tune, one which seems better than it actually is by reason of what has gone before. Rhythmically the music is feverishly alive; melodically it has to rely on actual or spurious folk tunes for sustenance. These sound very like concessions. The final section with its blocks of harmonies pushed this way and that makes a terrific din that fits the stage picture, but is meaningless without. As a study for Petrouchka the music has a definite interest and as all of us like a bit of "twopence coloured" at times, these records will find a place in our cabinets.

Whatever criticisms one may make of this Debussy–Scriabin–Stravinsky confection, there are none to be made about the recording. Real oboe tone, that floating incisive quality, is heard at last; the string background, the occasional solo violin relief, the writhings and posturings of the wind and brass are excellently reproduced. Everyone, at least, will be able to take genuine pleasure in the Dance of the Princesses (Part 3)."

N.P., The Gramophone, April 1925, review of the Albert Coates recording of Stravinsky's The Firebird

Colourful, euphoric and above all, musical

I have been unhappy with Pristine Audio’s attempts to make early LPs sound like digital CDs, but here we have a collection of acoustic recordings and the transfer engineer is Ward Marston. I have not been able to compare any other transfers of these same recordings – the various sites offering early recordings for free download, such as Shellackophile and Damian’s 78s, have not so far branched into Coates very much. My impression is that we hear these ancient recordings about as well as we are ever likely to. Readers who came to music in the 1960s will remember that in those days the typical LP player also had provisions for playing 78s. They invariably reproduced the discs with a high level of scratchy hiss. On the rare occasions that I actually heard some 78s played by a collector with an old player and a stock of fibre needles, the hiss was gentler, more of a swish, and the music somehow emerged from it remarkably well. That’s about how we get it here, but with more detail than most of those old players could ever extract. When the textures are relatively spare, as in the Ravel, it’s amazing how much nuance and timbre comes across. But there’s no denying that climaxes get strident, often confused, and the lack of depth is tiring to the ear.

There are historical recordings where one can still be caught up in an enthralling experience. There are others where the musical lessons to be gleaned are so great that it is worth persevering. But there are also some where one says “so that’s what it sounded like” and passes on to other things.

These considerations were particularly aroused by the Glinka and Rimsky-Korsakov items. This is the sort of music that thrives on modern sound. Nor does it call for the sort of interpretative insight reserved for the few. One can note that Coates’s “Symphony Orchestra”, whatever it was, was a crack band. In fast string passages he gets the sort of brilliant articulation generally associated, in recordings from that period, with Mengelberg and the Concertgebouw. Given that fast tempi go at a real lick, anyone who expects to find slack orchestral standards in London of the 1920s is in for a surprise. All the same, brilliant playing and high energy levels are not unknown in more recent times, so one would need some further reason for listening again. Not only do I not find this, I began to feel, particularly in the Golden Cockerel music, that Coates’s relentlessly up-front approach has its limits. It was interesting to turn to a little-remembered version of this suite set down, I think for Pye in the 1960s, by the London Philharmonic under Hugo Rignold - you can download this from Rediscovery Paperbacks if you’re interested. The LPO was not a virtuoso band at that time but there is a strong feeling of affectionate enjoyment of the music by all concerned and a welcome reminder that Rignold was a dab hand at music with a strong story-telling content. This is important with music that risks seeming the fruit of the drawing-board more than of inspiration.

Against all odds, the performance that gave me most pleasure here was that of the Stravinsky. With the music only thirteen years old, one rather expects to find a bemused orchestra treading warily and none too unanimously through the music on a note-by-note basis. Such early recordings of Stravinsky certainly exist – some of them under the composer’s own baton – but Coates’s band seems to have known the music all its life. The score is not played as an extravagant piece of noisy modernism but as a refined successor to Debussy, colourful, euphoric and above all, musical.

It’s interesting to have this followed by Kikimora, since Diaghilev had initially asked Liadov to compose the Firebird ballet. Stravinsky himself is down as saying that Liadov would never have had the energy to write a score like that. Strangely, in Coates’s super-energetic hands the two composers’ styles seem remarkably similar!

The Debussy is a slightly unsettled performance, though Coates, a noted Wagnerian, makes the most of the Tristan quote. In the Ravel we may note his skill in realizing every detail of the orchestration but we may also note a pervasively heavy, over-regular beat. How much more flexible is the 1949 Cluytens version, included in an Andante compilation of historical Ravel performances, “Le jardin fëerique” caressed and built up lovingly where Coates is almost perfunctory. Was he at his best only in music that is fast and noisy?

This compilation was sent to me in tandem with another containing Coates’s performances, from the same period, of Tchaikovsky’s 5th Symphony and Francesca da Rimini and Borodin’s Polovtsian Dances. For a rounded picture, the reader should now read my review of the companion disc.