Doráti tackles his countrymen on this early LP recording

Incredible sound from this release with The Antal Doráti Centenary Society

These recordings from the very earliest days of the tape and LP era have proved to be remarkably well made. Although the original LPs were a little 'murky' in sound on the Society's transfers, something which may reflect the wide variation in playback equalisations required for pre-RIAA LPs, once this was corrected and the sound sharpened up with XR remastering, the difference was astonishing to hear.

What was apparent, especially in the Bartók, was the still somewhat hit-and-miss approach to editing and tape recording generally. Some sections suffered from very raised tape hiss, elsewhere heavy hum tones came and went, and noise levels fell right back between movements, losing any sense of continuity.

My aim in restoring these recordings has been to apply a light touch to the problem of hiss wherever possible, allowing the tremendous depth of the recording to really breathe, and aiming for smooth transitions between sections of slightly higher and lower background hiss rather than the clunky and all-too-obvious original. Yet again, the sense of space and air within the recording is greatly enhanced by the use of Ambient Stereo processing.

Restoration and XR remastering by Andrew Rose at Pristine Audio, November 2008
Cover artwork based on a photograph of Antal Doráti 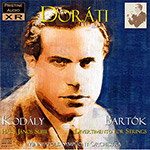